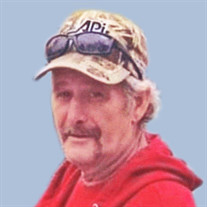 Rest in Peace, Ricky Lynn Torno, born in Sioux City, Iowa on July 10, 1954, to Gordon C. and Evelyn May Torno and whose birth was a mild surprise, died January 12, 2020 from causes related to life-long speaking and sleeping standing up, while his heart failed. A memorial service will be held Friday, January 24, 2020 at 10:00 a.m., at Christy-Smith Funeral Homes, Morningside Chapel, 1801 Morningside Avenue, Sioux City, Iowa. Visitation will begin one hour prior to the service at the chapel. "Ditter" as he was called even by those who knew his name. Rick's accomplishments were his family and any others will be published later, if any are discovered. He served in the U.S. Air Force proudly and loved to travel, as his occupation as an insulator took him many places, that's if he made it to the job. His truck liked to argue with him, but he always came back home to Insulators Local 57. Words of Wisdom from Rickie: "I did it my way" and he did! He was proceeded in death by his big brother, Danny Torno, who gave him boxing lessons; his father and mother (God Bless their souls) and is survived by his wife, Kim Alexander Torno. She knew that she had married a man who enjoyed his sports, as they honeymooned at a baseball game! Ricky was blessed with four wonderful children-one at a time, Heath, Chad, Joel, and Jeremiah Torno, who provided him with 8 grandchildren and one great-grandchild. Ricky left behind three brothers and four sisters,Reggie Torno and his wife Mona, Randy Torno and his wife Sohony, John Torno and his wife Kristen, Susan and her husband Dean Nolz, Sherrie and her husband Bob Mcclelland, Sheila and her husband Michael Smith, and Stacie Norton, his baby sister. He was loved and will be missed. Watch over us Ricky.

Rest in Peace, Ricky Lynn Torno, born in Sioux City, Iowa on July 10, 1954, to Gordon C. and Evelyn May Torno and whose birth was a mild surprise, died January 12, 2020 from causes related to life-long speaking and sleeping standing... View Obituary & Service Information

The family of Ricky L. Torno created this Life Tributes page to make it easy to share your memories.

Send flowers to the Torno family.