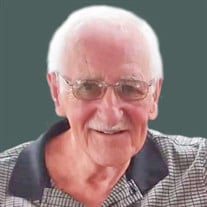 Richard (Dick) Eugene Waskow, 78, of Sioux City, died Friday, January 14, 2022, surrounded by his loving family, after a 9 month battle with cancer. Services will be at 11 am, Thursday, January 20th at St. Michael’s Catholic Church, located at 2223 Indian Hills Drive, in Sioux City with Rev. David Hemann officiating. Visitation will be Wednesday, January 19th from 4-8 pm, with prayer service at 7 pm at Christy-Smith Funeral Homes, Larkin Chapel, located at 2320 Outer Drive N. Family will be present from 6-8 pm. Feel free to wear your IA Hawkeyes or Minnesota Vikings attire. A private burial will be at a later date. Holy Cross Parish to live-stream Dick’s funeral Mass on Thursday, January 20th at 11:00 AM on the parish Facebook page and website. Links: https://www.facebook.com/holycrossparishsc/live/ https://holycrosssc.org/richard-eugene-dick-waskow-funeral Online condolences can be made to the family at www.christysmith.com. Richard was born in Marshalltown, IA on September 4, 1943, to Howard and Marian (Jenks) Waskow. He graduated from Baxter High School in Baxter, IA in 1961. He immediately enlisted as a medical technician in the United States Air Force, serving from 1961-1969. He was stationed at Lincoln Air Force Base; Lincoln, NE from 1961-1966. In April 1966- April 1969 he served during the Vietnam war in Tachikawa Air Force Base, Tokyo, Japan, as an aero-medical technician. Richard married the love of his life, Elaine (Smejkal) at Sacred Heart Catholic Church in Lincoln, NE on March 12, 1966. To this union they were blessed with 5 children. He attended the American Institute of Business in Des Moines for two years, which helped him be a successful salesman for Cook Paint, Robert’s Dairy and car sales. He was also employed by Blessed Sacrament, Mercy One, and retired from Palmer Candy in 2014. Richard was a member of American Legion Post 64, St. Michael Catholic Church, serving as an usher and gift bearer; a Hospice of Siouxland volunteer in the Vet-to-Vet palliative care program. He was also a member volunteer at the Siouxland Center for Active Generations. Richard enjoyed fishing, camping, playing pitch with his dear card club friends, and attending sporting and music events of his children and grandchildren. He also enjoyed many trips to Branson, MO, Loveland CO, and a cruise to the Bahamas. Richard was an avid fan of the Iowa Hawkeyes, Minnesota Vikings and the Chicago Cubs as well as attending many Heelan High School events. In October of 2021, Richard was chosen to honorably participate with Midwest Honor Flights Mission 8 to Washington D.C., where they visited many armed forces memorials. This was a testament for his courageous military service and heroism to the United States of America. His family will always cherish that opportunity given to him and his fellow Vietnam Veterans, giving them the special welcome home that they truly deserved. Richard is survived by his wife, Elaine, of almost 56 years; three sons, Timothy (Ginger) of Sioux Falls, SD, Thomas of Sioux City, Todd (Doren Wood) of Sioux City; daughter, Theresa (Bradley) Bollinger of Sioux City; 20 grandchildren; 8 great-grandchildren; and many nieces and nephews. He also leaves behind his beloved dog, Missy. He will truly be missed and always remembered by us all. Richard was preceded in death by his parents; grandparents; son, Troy; brothers, Norman, Norbert, Duane, and Jerry; and sister, Carol VanderLinden. The family wishes to thank the staff at the June E. Nylen Cancer Center, the VA Medical Clinic in Dakota Dunes, and Hospice of Siouxland. In lieu of flowers, memorials may be directed to Midwest Honor Flight or the American Cancer Society.

The family of Richard Eugene "Dick" Waskow created this Life Tributes page to make it easy to share your memories.

Send flowers to the Waskow family.