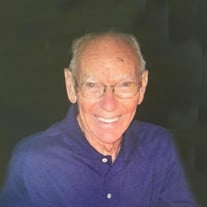 Richard W. LeFebvere, age 94, of Sioux City, IA, joined his family in heaven on Friday, July 2, 2021. His loving wife of 57 years, Shirley, was by his side. Memorial Service will be held 10:30 a.m. Friday, July 9, 2021, at Morningside Lutheran Church located at 700 South Martha Street in Sioux City. Visitation will be held on hour prior to the service. Burial will take place on a later date at Memorial Park Cemetery. Christy-Smith Funeral Homes, Morningside Chapel is assisting the family with services. Richard was born on April 22, 1927, in Correctionville, IA, the son of Don and Lillian (Bentley) LeFebvere. He was the eldest of 9 children in the family. Richard grew up in a loving family, moving to Sioux City as a teenager. He joined the Army in 1945 and was stationed in Leavenworth, KS. He held various jobs including a position at Galinsky’s Fruit Market and 34 years with Aalfs Manufacturing. Rich was also a faithful member of First Lutheran Church and Morningside Lutheran Church, where he was an usher for many years. Richard was a loving father, devoted to his wife, Shirley, and his 4 children. He was blessed with many grandchildren and an abundance of great grandchildren. He loved bowling, camping, horseshoes, auction sales, and vintage cars. Rich had a flavor for telling stories as well as the gift of listening to anyone who would share a cup of coffee. He is survived by his wife, Shirley of Lawton, IA; son and daughter-in-law, Larry and Gerry LeFebvere of Garfield, AR; son and daughter-in-law, Brad and Julie LeFebvere of Colorado Springs, CO; daughter and son-in-law, Linda and Jim Baruth of Grundy, IA; daughter and son-in-law, Jennifer and Dave Lyman of New Braunfels, TX; brother, Roger LeFebvere of Sioux City, IA; sister and brother-in-law, Diane and Ken Abraham of Claremore, OK. He is preceded in death by his parents, Don and Lilliam LeFebvere; brothers, Raymond and Robert; sisters, Shirley, Wilma Tjebben, Margaret King, and Carol Bahney.

The family of Richard Wayne LeFebvere created this Life Tributes page to make it easy to share your memories.

Send flowers to the LeFebvere family.