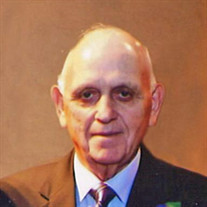 Richard "Dick" Haafke, 85, of Bronson, died Sunday, Dec. 9, 2018, at Pioneer Valley Nursing and Rehab in Sergeant Bluff. Services will be 10 a.m. Thursday at Morningside Chapel, Christy-Smith Funeral Homes, 1801 Morningside Ave., in Sioux City, with the Rev. Gene Stockton officiating. Interment will be in Memorial Park Cemetery. Visitation with the family will be 9 a.m. until service time Thursday at the funeral home. Online condolences may be made to the family at www.christysmith.com. Dick was born on Nov. 6, 1933, in Sioux City, to Herman and Jeannette Haafke. He grew up in the Bronson area and graduated from Bronson High School. Dick married Ruth Till on Feb. 17, 1956. The couple had three children, Randy, Becky and Robert. He farmed near Bronson and worked for Prince Hydraulics. He later went to work for Walman Optical, retiring in 1992. He was a former member of New Life Community Church in Sioux City. Survivors include a son, Randy (Marilyn) Haafke of Bronson; daughter, Becky Haafke of Sioux City; grandchildren, Kirk (Megan) Haafke of Bronson, Kyle (Kalyn) Haafke of Oaks, N.D., Monica Haafke of Lincoln, Neb., and Armando Haafke of Sioux City; great-grandchildren, Kora Haafke, Karlee Haafke and Max Klein; a twin brother, Raymond (Kathy) Haafke of Bronson; sisters, JoAnn Anderson of Omaha and Donna Johnson of Iowa City, Iowa; numerous nieces and nephews; along with many cousins who were special to him. He was preceded in death by his wife, Ruth; and son, Robert Gordon Haafke, in 1982. The family wishes to thank Pioneer Valley Nursing Home, Hospice of Siouxland, Unity Point Health St. Luke's Hospital and all his friends for all the love and support given to Dick and the family. Memorials may be directed to Hospice of Siouxland.

The family of Richard Haafke created this Life Tributes page to make it easy to share your memories.

Send flowers to the Haafke family.