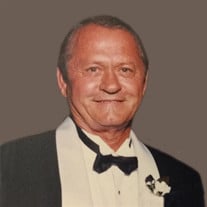 Richard Arlen Cornell, 82, of Sioux City, died Wednesday, April 17, 2019, at a local care facility. Services will be 11 a.m. Tuesday at Concordia Lutheran Church. Military rites will be offered by the Siouxland Marine Corps League immediately following the service. Visitation will be 4 to 8 p.m. Monday, with the family present 5 to 7 p.m. and a prayer service at 7 p.m. at Larkin Chapel, Christy-Smith Funeral Homes, 2320 Outer Drive North. Richard was born in Sioux City, on June 3, 1936, the son of Edward H and Eleanor (Burkhart) Cornell. He entered the U.S. Marine Corps during the Korean War and proudly served his country during his tour of duty. He was united in marriage with Marilyn Rys and the couple had four sons. They later divorced and he married Ruth C Lettau on July 21, 1967. He was a lifelong resident of Sioux City. Richard was employed by the city of Sioux City for 38 years and for 37 of those years he worked on the tree trimming crew. He attended Concordia Lutheran Church. Richard loved playing golf, watching every sport he could on television, camping and fishing with family. He was an avid Iowa Hawkeye Fan. He is survived by his wife, Ruth of Sioux City; his son, Dennis McKenzie and his wife, Carolyn of Kansas City, Mo.; daughter, Teresa Johnson and her husband, Jeff of Sioux City; sons, Tim Cornell, Rick Cornell, Dan Cornell, and David Cornell; a sister, Chyrol Genovese of St. Louis, Mo.; and his three grandchildren, Cameron, Timmy, and Amanda. He was preceded in death by his parents; and brothers, Ed and Bob.

The family of Richard Arlan Cornell created this Life Tributes page to make it easy to share your memories.

Send flowers to the Cornell family.