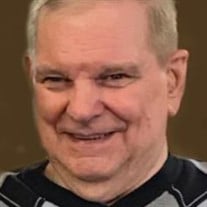 Richard Vern Bindner, age 80, of Sioux City died February 29, 2020 at Holy Spirit Retirement Home in Sioux City. Mass of Christian Burial will be held at 10:30 a.m., Saturday, March 7, 2020 at Holy Spirit Retirement Home with entombment following at Calvary cemetery. Visitation will held on Friday, March 6, 2020 from 4:00-7:00 p.m. , with the family present at 5:00-6:30 p.m. at Christy-Smith Funeral Homes, Larkin Chapel, 2320 Outer Drive N, Sioux City, Iowa. Also Friday, March 6 at Christy-Smith Funeral Homes, Larkin Chapel, a Knights of Columbus Rosary held at 6:30 p.m. and a Vigil service held at 7:00 p.m. Richard was born in Le Mars, Iowa on April 14, 1939, the son of George P. and Margery A (Smith) Bindner. He attended the University of Iowa for two years. He also attended Briar Cliff College, where he was a member of the first class of men admitted to the college. He also later attended Ohio State University, and Nettleton Business College. He was a devoted husband to Bernadine Brandt, whom he married on March 10,1973 in Sioux City. Bernadine preceded Richard in death on September 24,1996, Richard farmed in the Le Mars, Iowa area for a few years before moving to Sioux City in 1963. He worked at Wilson Trailer Company for two years, Robb Ross for a short period of time, and then began working for the Iowa Department of Transportation for 20 years retiring in 1994. He was a member of St. Joseph Catholic Church, along with a 60 year member of the Knights of Columbus, The Newman Club, The Catholic Social Club, and the Romans Club. Richard was also a charter member of Queen of Peace, as well as an original member of The Peace Corps in 1963. He was also a member of the American Federation of State, County and Municipal employees for 19 years. In his earlier years, Richard loved going to Shore Acres for dancing, with his friends. He enjoyed playing Bingo in his later years, watching movies with Paulette and attending Daily Mass. He is survived by his devoted friend, Paulette Fletcher of Sioux City; two sisters, Georgia Mayberry and her husband Robert of Winnebago, NE and Joan Kober of Sioux City; three brothers, Paul Bindner of Le Mars, IA, David Bindner of Des Moines, IA, and Thomas BIndner and his wife Linda of Marcus, IA. He is also survived by several nieces and nephews, and his very special niece Barb Roberts and her husband Kevin of Sioux City. Richard was preceded in death by his beloved wife, Bernadine; his parents; and his special pets, Kibby and Timmy.

The family of Richard Vern Bindner created this Life Tributes page to make it easy to share your memories.

Send flowers to the Bindner family.