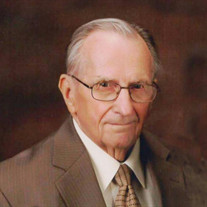 Rex James Wilcox, 95 of Sioux City, Iowa died on August 10, 2021, at Sunrise Retirement Community in Sioux City, Iowa. A Funeral service will be at 10:30 AM on Monday at Immaculate Conception Catholic Church of the Mater Dei Parish located at 1212 Morningside Ave, Sioux City, IA with the Reverend Brad Pelzel officiating. Interment will be in St. Michael's Catholic Cemetery, So. Sioux City, NE. The family will receive friends from 5:00 PM to 7:00 PM on Sunday, August 15, 2021 at Christy-Smith Morningside Chapel, 1801 Morningside Ave, Sioux City, Iowa. A Rosary will begin at 6:30 PM followed by a Parish Vigil Service at 7:00 PM. Online condolences may be made to the family at www.christysmith.com Rex was born on April 16,1926 in Norfolk, Nebraska, to Rex M. and Ida (Boyer) Wilcox. Shortly after his birth the family moved to Pennsylvania where he grew up and graduated from high school. He enlisted in the US Army Air Corps in October of 1943 and served in the Asiatic - Pacific Theater. He was honorably discharged in April of 1946 and went to visit his mother in Nebraska. He decided to stay and attend Norfolk Junior College, and that is where he met his bride to be Dorothy Koch. The couple were united in marriage Sept. 16, 1948. The couple raised 6 children and watched their family grow to include 13 grandchildren and 10 great grandchildren. Dorothy passed away in Oct. of 2017 after 69 years of marriage. Rex began working at the Norfolk, NE Post Office in 1952 and about the same time he re-enlisted in the Active Army Reserve as a part time job. In 1958 he was promoted to a supervisory position as a tour foreman in the Post Office. In 1972, he was appointed Postmaster in South Sioux City, NE retiring in 1983. He remained active in the Army Reserve during his employment with the US Postal Service retiring from the Army Reserves in 1986. In 2009, they sold their home in South Sioux City and moved to Dakota Dunes, SD and 2016 to Whispering Creek Active Retirement in Sioux City. After retirement Rex and Dorothy enjoyed many wonderful trips together. He has been to all 50 states, has hot air ballooned in Arizona and attended major league baseball games throughout the country. In 2008, they went on a trip to France and Italy. On the trip to Rome, they toured the Vatican and saw Pope Benedict. Rex was a member of the Immaculate Conception Catholic Church, Knights of Columbus # 3844 in South Sioux, Garrigan Assembly of Knights of Columbus #265 in Sioux City, the American Legion Post 307 of South Sioux City. His life will always be remembered by his children, Carol (Dale) Thompson of Rolling Meadows, IL, James (Jeanne) Wilcox of Galloway, NJ, Jane (Patrick) Loving of Sioux City, IA Julie Wilcox of Denver, CO and Catalina Quitugua of Denver, CO, 13 grandchildren and 10 great grandchildren. He was preceded in death by his parents; son, David Wilcox, daughter, Margaret Wiebelhaus.

Rex James Wilcox, 95 of Sioux City, Iowa died on August 10, 2021, at Sunrise Retirement Community in Sioux City, Iowa. A Funeral service will be at 10:30 AM on Monday at Immaculate Conception Catholic Church of the Mater Dei Parish... View Obituary & Service Information

The family of Rex James Wilcox created this Life Tributes page to make it easy to share your memories.

Send flowers to the Wilcox family.