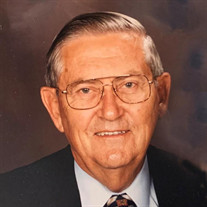 Raymond (Ray) LaFleur, 94, passed away peacefully on February 26, 2022 and is on his way to be rejoined with his bride of almost 58 years in heaven. He waited 94 years because as he liked to tell people, “the devil doesn’t want me and the good Lord’s not ready for me yet.” Services will be 10:00 a.m. Friday, March 4th at St. Peter’s Catholic Church in Jefferson, S.D. with Fr. Joseph Vogel officiating. Visitation with the family will be 5:00 p.m. to 7:00 p.m. Thursday, March 3rd with a prayer service at 7:00 p.m. at the church. Arrangements are under the direction of Christy-Smith Funeral Homes – Morningside Chapel. Following the funeral there will be a burial at St. Peter’s Cemetery with a luncheon after at the St. Peter’s Community Center. Online condolences can be left for the family at www.christysmith.com A lifelong resident of Jefferson, South Dakota, Ray was born on August 19, 1927 to Joseph and Marian (Bernard) LaFleur. He graduated from Jefferson High School in 1945 and enlisted in the United States Navy, where he served in the final days of World War II before being honorably discharged. He married his lifetime sweetheart Patricia Conley on October 26, 1948. Together they raised nine children (8 sons and 1 daughter), which Ray attributed to living so close to the railroad tracks. Always quick with a quip, Ray made a big impact in his small town, providing service as a charter member and treasurer of the Jefferson Chamber of Commerce, charter member and secretary of St. Peters Knights of Columbus, member of St. Peters Parochial School Board, board member of the Jefferson Public School Board and as sexton for St. Peters Cemetery for over 40 years. He also provided over 40 years of service on the Jefferson Volunteer Fire Department and was proud of his lifetime membership in the American Legion Post #134 where he recently received an award for over 70 years of service. Ray’s large family guaranteed he needed to work hard to support his family. Ray learned his initial trade from Martin Bosse of Bosse Oil Co. He leased the Jefferson Sinclair service station from Martin from 1948 to 1983. He also worked for Dirks Motor Co as a salesman for many years. He ended his career working at Beano & Sherry’s Casinos where he would tell everyone that his son Beano had sewed his pant pockets shut so he could work with the handling of money. He retired in 2004 and turned his favorite activity of regularly beating his children and grandchildren in cribbage into a full-time hobby. Ray never met a cribbage board he couldn’t conquer and all that loved him knows he’s now in heaven playing cribbage with some of his favorite people. Left to treasure his memories are his children; daughter Brenda (Chuck) Koerner of Mound, MN; son Mark (Carol Ebel) LaFleur of Jefferson, SD; son Vincent LaFleur of No. Sioux City, SD; son Barry (Terese) LaFleur of Rapid City, SD; son Ted (Dee Dee) LaFleur of Sioux City, IA; son Dean LaFleur of Shakopee, MN; daughter-in-law Sherry (LaFleur) Maguire of Dakota Dunes, SD; daughter-in-law Debra (LaFleur) Hellman of Burt, IA; sister JoAnn (Doug) Faber of Phoenix, AZ; sister-in-law Ruth (David) LaFleur; 23 grandchildren; 34 great-grandchildren and 4 great-great grandchildren. Welcoming him to heaven is his wife Patricia; son Rocky LaFleur; son Dennis (Debra) LaFleur; son Steve “Beano” (Sherry) LaFleur, his parents; brother David (Ruth) LaFleur; daughter-in-law Kathryn (Mark) LaFleur and great-grandchildren Eleanor LaFleur-Garlitz and Willow Lopez.

The family of Raymond Bernard LaFleur created this Life Tributes page to make it easy to share your memories.

Send flowers to the LaFleur family.