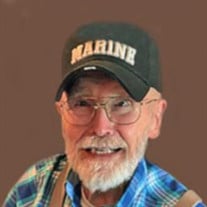 Raymond Leroy Deabler, 88 of South Sioux City, formerly of Sioux City, died Saturday, Oct. 3, 2020, at a South Sioux City care facility. Private services will be held. Burial will be in Graceland Park Cemetery, Sioux City. Arrangements are under the direction of Morningside Chapel, Christy Smith Funeral Homes. Raymond was born on Jan. 29, 1932, in Haddon Heights, N.J., the son of William and Alice (McGuire) Deabler. He attended school in the area and followed in his father’s footsteps in electrotyping. He served his country as a member of the U.S. Marine Corps during the Korean War from 1951 to 1953. He was united in marriage with Linda Lee Kneifl in Sante Fe Springs, Calif. on Nov. 29, 1958, and to this union four children were born. Ray had survived cancer twice in 1995. He did private gardening, was a scouting volunteer, sang in the choir at St. Joseph’s and the Siouxland for Active Generations Choir. He enjoyed square and round dancing with teachers, Jane Hunkins, and B.J. Heitzman. He was proud to dance with his daughter, Maria Timothy, as his partner. He is survived by his former wife, Linda Lee, the loving mother of his four children; his two sons, Alex and his wife, Ronda, and Matthew and his fiancee, Amanda; his two daughters, Maria Timothy, and Sandra and her husband, Tom; his seven grandchildren; along with many nieces and nephews. Ray was preceded in death by his parents; three stepmothers; three nephews; his brother, Bill; sister, Alice; and one granddaughter, Carley Elizabeth.

The family of Raymond Leroy Deabler created this Life Tributes page to make it easy to share your memories.

Send flowers to the Deabler family.