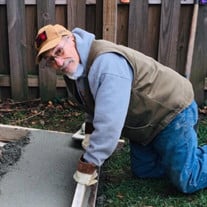 Raymond Eugene Bennett, 74 of Sioux City, Iowa passed away peacefully at his home, next to the warmth of his fireplace on January 22, 2021, surrounded by the love of his family following a battle with cancer. Ray was born on June 23, 1946, to Eugene and Mary (Krokowski) Bennett in Sioux City Iowa. He attended St. Francis Catholic grade school and graduated from Bishop Heelan Catholic High School in 1964. Following high school, he attended Wayne State College for two years. He then worked in the meatpacking plant for two years before proudly serving in Vietnam from 1968 to 1969 as a crew chief/door gunner on a Huey Hog helicopter. Ray returned home from Vietnam, met and married Kathleen Walding of Sioux City in 1971. They had four children. During this time Ray worked with his father at the family construction business, Bennett Masonry and Concrete. In 1981 he started working at MidAmerican Energy for 28 years before retiring in 2009. Ray was happiest keepin’ busy when it was 100 degrees out and sun- shining. His heart was most full when he was with his family gathered in his house, around the fireplace that he built. Ray was a proud, proud papa to three grandsons James, Ozzie, and Iggie. Even on his toughest days, the sound of his three “buddies” brought joy to his eyes. He mastered Marco Polo videos and game time over the phone with them. He enjoyed working on projects in his garage, yard, and on his home. His passions for antiquing, flea marketing, gun collecting, catfishing, and pheasant hunting kept him on the go. Ray was a proud Vietnam Vet who enjoyed helping family, friends, and neighbors. The legacy of his masonry and concrete craftsmanship can be seen all over Siouxland. As he drove the streets of Sioux City on his frequent visits to Fareway/Scheels/Menards, Ray would inevitably run into someone he knew and shoot the breeze. Ray was a collector of, well…everything. His philosophy of owning four wheelbarrows or 19 drill bit sets, was that if one broke – he had another or in case someone else might need one. The man was innately a planner and fixer, thinking at least 13 steps ahead with every move he made. He wanted to be prepared for any possible situation, which might explain why he had enough firewood for the entire state of Iowa. His unique ability for thinking far ahead provided those around him with strength and comfort. Ray is survived by his partner of almost 25 years Dianne Yates-Miller, his previous spouse Kathleen Walding-Bennett, Daughter Elizabeth Bennett and partner Kurt Miller; of Omaha, son Nicholas Bennett of Omaha;, daughter Katie Bennett-Light and Jason Bennett-Light of Omaha; sister Mary Bennett Rygh and partner Bill Clark of Sioux City; Brother Gary Bennett and wife Connie of Muscatine, IA; brother-in-law Ron McEntaffer; Step-daughter Kristie Miller-Arlt of Sioux City; grandsons Ozzie and Iggie Bennett-Light; James Arlt, six nephews and one niece and several great nieces and nephews. Ray was preceded in death by his infant daughter, Emily, parents Eugene and Mary Bennett, and sister, Linda McEntafffer. Funeral will be 10:30 AM, Wednesday, January 27, 2021 at Christy-Smith Funeral Homes, Morningside Chapel, 1801 Morningside Ave., with Father Roger Linnan officiating. Visitation will be 4:00 – 8:00 PM, Tuesday, January 26, 2021 at Christy-Smith Funeral Homes, Morningside Chapel. Burial will be at Calvary Cemetery. In true Ray Bennett fashion, please feel free to wear what makes you feel most comfortable. Flowers are welcome, however, Ray would prefer to have donations made to the Disabled American Veterans in his memory at https://www.dav.org/ The family has set up live streaming for the visitation and for the funeral. Visitation live-streaming link: https://youtu.be/afuSiPtknoo Funeral live-streaming link: https://m.youtube.com/watch?v=SUP75oH6d7U&feature=youtu.be

Raymond Eugene Bennett, 74 of Sioux City, Iowa passed away peacefully at his home, next to the warmth of his fireplace on January 22, 2021, surrounded by the love of his family following a battle with cancer. Ray was born on June... View Obituary & Service Information

The family of Raymond Eugene Bennett created this Life Tributes page to make it easy to share your memories.

Send flowers to the Bennett family.