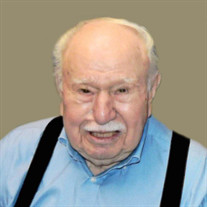 Ralph Maslonka, 92, passed away Sunday, May 16, 2021, at Sunrise Retirement Community in Sioux City, IA. A visitation will be 5:00 – 7:00 pm Wednesday, May 19, 2021, at Christy-Smith Funeral Home, Morningside Chapel, 1801 Morningside Ave., with a Prayer Service at 6:30 p.m. A funeral service will be 10:30 am Thursday, May 20, 2021, at Faith United Presbyterian Church with burial in Rose Hill Cemetery in Pender, NE. My father was NOT a real churchgoer. He was more likely to be on a lake fishing on a Sunday morning. We went fishing as a family for decades-farm ponds, rivers, and lakes. Later in life, he passed his joy of fishing onto his grandchildren. Ralph entered this world on October 14, 1928, to Ted and Ruby Maslonka, the second of eight children. He grew up in Walthill, NE, where they farmed. Ralph was a proud member of the U.S. Army, serving during the Korean War as a Military Policeman in Japan. He met his future wife, Eleanor Fillipi, through mutual friends and had a long distance relationship with her throughout his service. Ralph and Eleanor married in Pender, NE on September 6, 1953. To this union were born Bradley James and Laurinda Marie. He started his 30 year career with Kent Feeds in 1959. Their first home was on McDonald Street and then they moved to 2815 Laurel Avenue. After retirement, they built their dream country home outside of Dakota City, NE. They loved having all six of their grandchildren come stay with them. Playing and helping in their one-third of an acre garden and building a tree house. Eleanor passed away in June of 2010, after 56 years of marriage. He moved into Sioux City in 2014, to Meadow View Lane. Left to cherish his memories are his children, Brad (Carla) Maslonka and Laurinda Finken; grandchildren, Adam (Sara), Brian (Jacquelyn), and Sam Maslonka, Maggie (Graham) Hammond, Stevie (Augie Risner) Rice; and great-grandchildren, Ava, Sophie, Annie, and Arnie. He was preceded in death by his parents; wife, Eleanor; a grandson, David Lee; and a son-in-law, Mel Finken. Special thanks to Debbie Logan and the nurses of Siouxland Hospice. In lieu of flowers, the family has requested that memorials be directed to the Faith United Presbyterian Boy Scout Troop #208.

The family of Ralph Lloyd Maslonka created this Life Tributes page to make it easy to share your memories.

Send flowers to the Maslonka family.