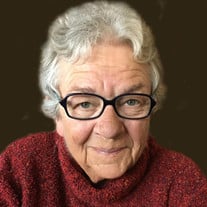 Phyllis A. Nichols, 77, of Sioux City, died Thursday, Aug. 30, 2018, at her residence in Sioux City. Memorial services will be 11 a.m. Tuesday at Morningside Chapel, Christy-Smith Funeral Homes, with visitation one hour prior. Phyllis Ann Van Haitsma, the daughter of Clarence and Freida (Riddle) Van Haitsma was born Nov. 2, 1940, in Wagner, S.D. She graduated from East High School in Sioux City, and went on to earn her Registered Nursing Degree from Methodist Hospital School of Nursing. Phyllis then attended Peace Corps training at the University of Oklahoma in the 1960s. She served for two years in central South America, including Bolivia. In 1965, while Phyllis was serving on the Hospital Ship Hope in Panama, she met the love of her life and future husband, Curran Philip "Phil" Nichols. They were later married. After the birth of their first child, Phyllis stayed at home as a homemaker for many years. In the late 1980s, Phyllis went back to her nursing roots and was employed at Courage Homes. Most recently, she was Director of Nursing at Park View Homes, retiring in 2006. Phil died Oct. 4, 1981. Phyllis enjoyed fishing, bowling, and going to casinos. She loved an adventure, and would travel with her family exploring beaches looking for fossils and shark teeth. However, the most important aspect of her life was family. Phyllis cherished the time that she could spend with her children and grandchildren. Phyllis is survived by her children, Rebecca "Becky" Shores and her husband, Tracy of Meridianville, Ala., Lisa Litchfield and her husband, Christopher of Austin, Texas, and Curran "Nick" Nichols and his wife, Sheri of Johnstown, Colo.; two grandchildren, Keegan Nichols and Nathan Weiland; one great-grandchild, Asher Weiland; a sister, Lois Stabe of Sioux City; and many other relatives and friends. She was preceded in death by her parents; and her husband.

Phyllis A. Nichols, 77, of Sioux City, died Thursday, Aug. 30, 2018, at her residence in Sioux City. Memorial services will be 11 a.m. Tuesday at Morningside Chapel, Christy-Smith Funeral Homes, with visitation one hour prior.... View Obituary & Service Information

The family of Phyllis Ann (Van Haitsma) Nichols created this Life Tributes page to make it easy to share your memories.