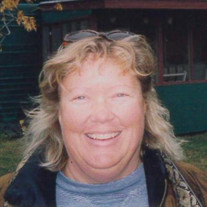 Peggy Marie McPherson, 61, of Sioux City, passed away on Thursday, December 9, 2021, in a local hospital, with her husband by her side. A Celebration of Life gathering will be held 4:00 pm to 5:30pm Sunday, December 19, 2021, at Christy-Smith Funeral Homes, Morningside Chapel, 1801 Morningside Ave., with a Memorial Service to follow at 5:30 pm. Online condenses may be expressed to the family at www.christysmith.com. Peggy Marie McPherson, daughter of Chuck and Sharon Deist, was born on October 27, 1960, on a US Naval base in Morocco, Africa. As her father was in the Navy, Peggy’s early years were spent in up-state New York, Lakehurst, MacQuire Naval Base, and Tom’s River, New Jersey before finally settling in Sioux City with her family, becoming a long-time resident of Morningside. Peggy attended Immaculate Conception grade school and East High School, where she graduated with the Class of 1979. Soon thereafter Peggy was united in marriage with her high school sweetheart, Jeffrey Loy McPherson, on July 10, 1982. Peggy began her working career in retail at the Half Price Store and from there she continued to work in customer service and other administrative assistant positions with various local organizations. Most recently she was employed at Marshalls. Peggy and Jeff made a great summer escape for themselves up on the river just outside of Vermillion, SD. It was there they enjoyed many seasons with family and friends, fishing, swimming, boating, campfires, soaking up the sun and enjoying beautiful sunsets on the river. Peggy’s annual Girl’s Night on the River was enjoyed by many and those memories will always be cherished. Peggy was also a great collector of beautiful things such as depression era glassware, spice racks, salt/pepper sets, anything gingerbread men, and pretty planters just to name a few. She and Jeff enjoyed doing wood-working projects together and shopping for antiques. Peggy always had an easy way with people, a warm inviting smile, a witty sense of humor, as well as a Coors Light on hand for her family, friends and visitors. She loved traditions and even created many of her own such as her weekly TGIF emails, Last Friday of the Month at Jim’s Lounge and the annual Girl’s Night on the River. As traditions go, Peggy loved Christmas and she and Jeff enjoyed hosting the family holiday gathering for many years, until the family outgrew their beautiful home. Peggy is survived by her loving husband of almost 40 years, Jeffrey Loy McPherson, her father and his wife, Chuck and Elizabeth Deist, her five brothers and sisters, Nancy (Deist) Clearwater, Tammy (Deist) Larson, Dale and Cindy Deist, Jay and Marla Deist, and Terri (Deist) and Dan Spilde, and many nieces and nephews. She was preceded in death by her mother, Sharon Deist and infant brother, Wayne Deist.

The family of Peggy Marie McPherson created this Life Tributes page to make it easy to share your memories.

Peggy Marie McPherson, 61, of Sioux City, passed away on Thursday,...

Send flowers to the McPherson family.