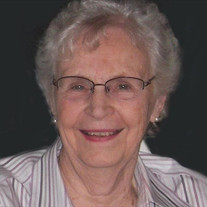 Peggy Joyce Edwards, 89, of Sioux City, died Friday, Feb. 8, 2019, at Sunrise Retirement Community in Sioux City. A private burial will take place at a later date in Memorial Park Cemetery. The family was assisted with arrangements by Christy-Smith Funeral Homes, Morningside. Peggy Joyce Kenny, the daughter of Ernest and Florence (Moline) Kenny was born March 21, 1929, in Sioux City. On Oct. 19, 1946, Peggy married Philip Edwards in Logan, Iowa. She was a homemaker and raised three sons. In 1965, Peggy received her GED from Leeds High School. Later in life, she was employed at Edward’s Top Line Transmissions, Inc. as a bookkeeper until her retirement. Philip died July 27, 2016. Peggy was a member of Bethel Baptist Church where she acted as the treasurer. She was also a member of Morningside Baptist Church, where she taught Sunday school and was president of the Women’s Missionary Group. Peggy as an avid bowler, and was the secretary of the Metropolitan Women’s Bowling League. She enjoyed handicrafts and was famous for her peanut brittle. Peggy is survived by her sons, Keith (Nancee) Edwards of Westfield, Iowa, Roger (Jackie) Edwards of Sioux City, and Gary (Connie) Edwards of Kansas City, Mo.; numerous grandchildren and great-grandchildren; and many other relatives and friends. She was preceded in death by her parents; husband; two grandchildren; three sisters, Ruth Brown, Dorothy Hicks and Marian Lake; and a brother, Ernest A. Kenny Jr.

The family of Peggy J Edwards created this Life Tributes page to make it easy to share your memories.

Send flowers to the Edwards family.