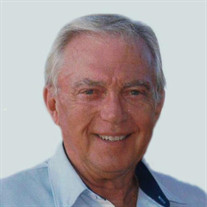 Paul H. Maurer, 91, of North Sioux City, SD passed away peacefully January 31, 2022. A visitation will be held 12:00-1:00 p.m., Saturday, February 12, 2022, at Christy-Smith Funeral Home, Morningside Chapel located at 1801 Morningside Ave, with the Memorial Service to follow at 1:00 p.m. Online condolences can be made to the family at www.christysmith.com. Paul was born July 28,1930 in Sioux City, Iowa, son of Andrew and Chrissie Maurer. He graduated from Central High School in 1948. He married Jacquelyn J. Derby in 1956, they had 2 children. The couple later divorced. He was employed in the finance and banking industry for 34 years. He always had a love of the outdoors which involved golfing, hunting and boating and camping on the Missouri River with many friends and family. He also loved to tell a great story or joke. After retiring he met the love of his life for the last 29 years, Marlys Larson. They enjoyed traveling, boating, camping, and wintering in South Texas and Arizona. Survivors include his son, Kip and his wife, Lynn of Griswold, Iowa; a daughter, Karley Boltz and her husband, Joe of Phoenix, Arizona; 10 grandchildren; and 6 great-grandchildren. Extended family includes Kim and Jack Haggerty; Janet and Ed Bock; 3 grandchildren; and 5 great grandchildren. He was preceded in death by his parents; sister, Helen; and brother, Gerald.

The family of Paul H. Maurer created this Life Tributes page to make it easy to share your memories.

Send flowers to the Maurer family.