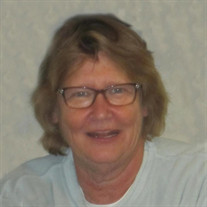 Patricia L. Washburn (Pat), age 70, of Lawton, IA, passed away Wednesday, September 15, 2021, at UnityPoint in Sioux City, IA. Visitation will be from 5:00-7:00 p.m. Monday, September 20, 2021, at Christy-Smith Funeral Homes, Larkin Chapel located at 2320 Outer Drive N. in Sioux City, IA. Prayer service will be at 7:00 p.m. Funeral service will be at 10:00 a.m. Tuesday, September 21, 2021, at Community Presbyterian Church in Lawton, IA. Burial will be at Banner Township Cemetery following the service. Patricia Louise Groetken was born June 28, 1951, in Sioux City. She grew up in the area and graduated from Heelan High School in 1970. She then went on to attend St. Luke’s Nursing School. On December 28, 1972, Patricia was united in marriage to Ronald Washburn. In 1978 the couple made their home in Lawton and were blessed with four boys, Matthew, Jeffrey, Rick, and Mitchell. She worked at Mercy Medical Center as a registered nurse for over 40 years, where she was the caregiver to countless people. Pat was a member at Community Presbyterian Church in Lawton where she served as an Elder. She also was a member of the Lawton Rescue Squad and the Lawton Fire Department Auxiliary, helping to raise funds for community activities. After retirement she was a volunteer first grade aide at the LeMars Community Schools. Pat was a beloved wife, mother, grandmother, sister, aunt and friend that lightened the mood of every room that she entered. Pat valued family over everything and always attended family gatherings or events no matter the distance. She was an eternal optimist that always savored the little moments of life whether it was golfing, reading, playing bunco, or rooting for her Vikings and Hawkeyes. She never missed a chance to cheer on her grandkids at their many activities. Pat’s authentic personality will forever make her impossible to replace but loved forever. She is survived by her husband of 48 years, Ron Washburn of Lawton, IA; 4 sons, Matt Washburn and his wife Courtney, grandson Caden, granddaughter Paige, and granddaughter Madilyn of Le Mars, IA, Jeff Washburn and his wife Kari, granddaughters Addison and Peyton of Elkhorn, NE, Rick Washburn and his wife Angie, granddaughter Lili of Sioux City, IA, Mitch Washburn of Iowa City, IA; siblings, Cyril (Pauline) Groetken of Yankton, SD, Rich (Kathy) Groetken of Bloomington, IL, Pete (Donna) Groetken of Sioux City, IA, Mary (Dale) Jones of Normal, IL, Bob (Deb) Groetken of Normal, IL, Cecil Groetken of Normal, IL, Deb (Jim) Weddingfeld of Yankton, SD; sister-in-law, Mary Groetken of Yankton, SD; along with many, many, nieces and nephews who she loved dearly. She is preceded in death by her parents, Cecil and Maude Groetken; brother, Mike Groetken; and sister-in-law, Lori Groetken.

The family of Patricia Louise Washburn created this Life Tributes page to make it easy to share your memories.

Send flowers to the Washburn family.