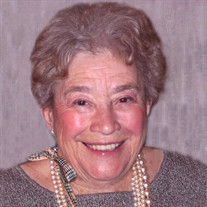 Patricia A. (Walsh) Keller, 88, died after a brief illness Sunday Oct. 21 2018. She was surrounded at the time of her death by three of her seven children. Memorial Service will be held Thursday, October 25, 2018 at 10:30 AM at Holy Cross Parish, St. Michaels Center. Rosary will be 4:00 PM, visitation will be from 3:30 PM to 8:00 PM, and a Parish Vigil Service 7:00 PM on Wednesday, October 24, 2018 at Christy-Smith Funeral Home - Larkin Chapel (2320 Outer Drive North). Private Family Burial will take place at a later date at Calvary Cemetery. Online condolences may be made to the family at www.christysmith.com Patricia was born on February 27th 1930 to James Walsh and Cora (Choquette) Walsh. She was a lifelong resident of Sioux City. She was a graduate of Cathedral High School and attended Briar Cliff University where she received a teacher's certificate. She taught primary grades in Holsten Iowa and Hunt School in Sioux City. She married Richard (Dick) E. Keller Nov. 22, 1952, they had seven children. While raising a family, Patricia known as Patsy or Pat, remained an active volunteer for the March of Dimes and American Heart Association. She was active member of St. Michael's Catholic Parish. Patricia returned to work at Westwood Nursing Home where she held the position of Activity Coordinator for 21 years. During her successful career there she started a Westwood newsletter after receiving a grant from Gateway for a new computer. Patricia had many passions in life. She was a voracious reader of all written genres of print. She attended writers and art classes at the Senior Center and was a frequent lender from the Sioux City Library. She was an avid swimmer, golfer, traveler and movie goer. She traveled over 35 states and 7 foreign countries. She is survived by two brothers James (Lois) Walsh, Michael (Mary) Walsh of Sioux City, seven children Andy Keller, Phil Keller, Joan Keller and Sister Theresa Keller FSPA of Sioux City, Michelle (Don) Cox of Alleman, Ia., Mary Keller of Washington, MO. and Richard Keller of Iowa City, IA, 10 grandchildren, 8 great grandchildren. Patricia is preceded in death by her husband Dick, her parents Cora and James Walsh.

Patricia A. (Walsh) Keller, 88, died after a brief illness Sunday Oct. 21 2018. She was surrounded at the time of her death by three of her seven children. Memorial Service will be held Thursday, October 25, 2018 at 10:30 AM at Holy... View Obituary & Service Information

The family of Patricia A. Keller created this Life Tributes page to make it easy to share your memories.

Patricia A. (Walsh) Keller, 88, died after a brief illness Sunday...

Send flowers to the Keller family.