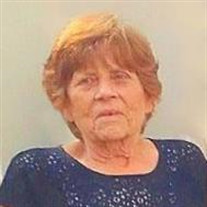 Patricia P. Cline, 72, of Sioux City, passed away Thursday, July 5, 2018. A celebration of life gathering and potluck will be 5 p.m. Thursday at First Unitarian Church, 2508 Jackson St. Patricia was born on March 17, 1946, in Sioux City, the daughter of Harold Peterson and Pearl Peterson. Patricia was raised by her stepfather, Ray Geveshausen. Pat attended East High School. She was married to Norman Cline on May 9, 1964, in Long Beach, Calif. She had lived in Sioux City and Long Beach. She was employed with Donnelly Marketing and did odd jobs for the city of Sioux City. She enjoyed working in her yard and tending her flower garden. She also enjoyed watching her television shows and going to the casino. Survivors include her daughter, Mindy Cline; her mother-in-law, Viola Cline; her grandchildren, Brooke, Dylan, Shaylee, Amara, Madison and Mason Cline, Sydney Gentry, Melissa (Chad) Robinson; siblings, Gary and Mike Peterson and Patsy Benson and spouses; seven great-grandchildren; and numerous brothers and sisters-in-law. She was preceded in death by her parents; her husband, Norman; and her sons, Mark and Matt.

The family of Patricia Pearl Cline created this Life Tributes page to make it easy to share your memories.

Send flowers to the Cline family.