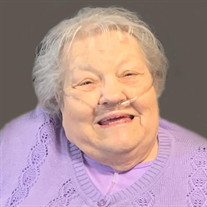 Patricia A. Burford, 90, died Monday, April 26, 2021, at MercyOne Medical Center in Sioux City, IA. A service will be held at a later date. Christy-Smith Funeral Homes, Morningside, is assisting the family with arrangements. Patricia Ann Smith, the daughter of Charles and Katherine (Hancock) Smith was born February 28, 1931, in Attica, IN. On September 15, 1948, Patricia was united in marriage with Walter G. Burford. Patricia and her family moved to California before settling in Iowa in 1977. They made their home in Minden. She was employed as a waitress for many years before going to work for Walmart in Council Bluffs, IA in 1997. Walter died March 12, 2006. Upon her retirement in 2016, Patricia moved to Sioux City. Patricia’s family was very important to her. She loved her dogs. She also enjoyed bird watching, feeding the squirrels, and flowers. Patricia found enjoyment in listening to music and watching her daily soap operas. Patricia is survived by her children, Margaret (Don) Henson of Willard, MO, Thomas (Rhonda) Burford of Minden, IA, Mona (Allen) McCormick of Midwest City, OK, Annette Mansfield of Oakland, IA, Mary Burford of Sioux City, Tamara Burford-Winston of Cañon City, CO; 16 grandchildren; 25 great-grandchildren; 7 great-great-grandchildren; and many other relatives and friends. She was preceded in death by her parents; husband; daughter Anna Mary Burford; two grandchildren, Michael Stevens and Alyssa Davis; siblings, Gene and Bobby Smith, and Norma McManomy.

The family of Patricia Ann Burford created this Life Tributes page to make it easy to share your memories.

Send flowers to the Burford family.