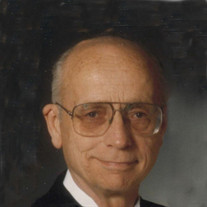 Orville R. DeJong, 85, of Sioux City, died Saturday, Jan. 5, 2019, at his home. Memorial services will be 11 a.m. Wednesday at Calvary Lutheran Church in Sioux City. Private burial will be in Memorial Park Cemetery. Visitation will be 6 to 8 p.m. Tuesday, with a prayer service at 7 p.m., at Larkin Chapel, Christy-Smith Funeral Homes. Mr. DeJong was born on April 28, 1933, in Sioux City, the son of Peter and Nettie (Iverson) DeJong. He was raised in Sioux City and surrounding communities in Iowa and graduated from Boy's Town, west of Omaha in 1951. In September 1951, Orville joined the U.S. Navy and served aboard the U.S.S. Wasp during the Korean War. He was honorably discharged from the Navy in 1955 and returned to Sioux City. Orville married Marjorie C. Stier on May 5, 1957 at Immanuel Lutheran Church in Schleswig, Iowa. After which, the couple raised four children in Sioux City. He attended college classes at Morningside College and started his working career at Iowa Public Service. He later worked at Purolator Courier Corp. until 1982. Orville retired from the Sioux City Public School District, where he worked in building services until 1995. Orville was an active member of Calvary Lutheran Church, where he served as a trustee for many years. He enjoyed sharing his sense of humor with family and friends. He cherished family gatherings and attending the activities of his grandchildren. Survivors include two daughters, Debbie and her husband, Larry Leigh of Sioux City, and Stacey DeJong of North Liberty, Iowa; two sons, Doug of Newton, Iowa, and Steve and his wife, Fran of Sioux City; six nieces, Linda Hesebeck of Sioux City, Ruth (Gordon) Yoerger of Merrill, Iowa, Sharon (Robert) Stenum of Sioux City, Carol Anderson of Le Mars, Iowa, Janet (Dieter) Dorale-Hampf of Lawton, Iowa, and Peg (Mike) Christenson of Hutchinson, Minn.; a nephew, Calvin Dorale of Lawton; a sister-in-law, Deloris Ellsworth of Sioux City; a granddaughter, Abbie Leigh; and two grandsons, Jacob and Matthew DeJong. He was preceded in death by his loving wife of 42 years; his parents; a sister, Gwendolyn and her husband, Wayne Dorale; a brother, Glen DeJong; and a nephew, Gordon Dorale.

The family of Orville R DeJong created this Life Tributes page to make it easy to share your memories.

Send flowers to the DeJong family.