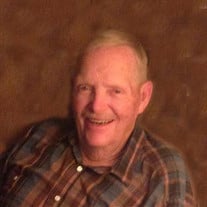 Norwin (Norm) Treft, 86, Sioux City, passed from this life on November 8, 2018 surrounded by his family. A memorial service will be at St. James United Methodist Church, where he was a long-time member, on November 13, 2018 at 11:00 AM with Rev. Scott Squires and Rev. Dr. Eric Sayonkon officiating. A visitation will be one hour prior to the service celebrating his life at the church. Norm was born in Sioux City on June 1, 1932 to John Albert and Lorraine (Strandburg) Treft, the eldest of seven children. He attended Sioux City Public Schools until his family moved to a farm near Emerson, NE where he attended high school, graduating from the Emerson High School. Shortly after graduation he moved back to Sioux City and was employed by Farmers Lumber and Supply. On Aug. 17, 1952 he and Donna Weekley were united in marriage. Norm entered the U.S. Army in 1952. Prior to deploying to Korea, Norm received special training in Japan to disarm hidden explosives. He was honorably discharged in Nov. 1954. After returning to Sioux City he was employed with the U.S. Postal Service for 38 years, until his retirement. Norm was a member of St. James United Methodist Church and the Morningside American Legion Post 64 Monahan-Nelson, as well as the Boys of 68. For many years, he and his wife enjoyed ballroom dancing. Norm took pleasure in his pets and spending time outdoors gardening, fishing, and hunting. He was a loving husband, father, and grandfather, who especially enjoyed being around children. He was known for his kindness and generosity and was loved by all who knew him. He was always ready to lend a helping hand. He is survived by his wife of 66 years, Donna; three children, Mark (Lori) Treft, Leisa (David) Barrier, Paul (Nancy) Treft; seven grandchildren, Tara (Nick) Anderson, Kyle (Kayla) Barrier, Brandon (Jillian) Treft, Adam (Brittany) Treft, Cody Treft (Jolynn Fletcher), Angela Treft, Connor Treft; and 4 great-grandchildren. Additional survivors include two brothers, LeRoy (Sharon) Treft, Gaylin (Karen) Treft; two sisters, Kathleen Fischer and Sharon (Jeff) Bristol; two sisters in-law, Leila (Bob) Agee and April (Harold) Hanson along with numerous nieces, nephews, cousins and other loving family members and friends. He was preceded in death by his parents, Albert and Lorraine Treft; a brother and sister in-law; Merlin and Ethel Treft; and a sister Wanda Hopkins. Memorials may be directed to Hospice of Siouxland.

Norwin (Norm) Treft, 86, Sioux City, passed from this life on November 8, 2018 surrounded by his family. A memorial service will be at St. James United Methodist Church, where he was a long-time member, on November 13, 2018 at 11:00... View Obituary & Service Information

The family of Norwin E. "Norm" Treft created this Life Tributes page to make it easy to share your memories.

Send flowers to the Treft family.