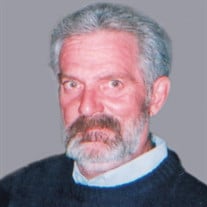 Norman L. Hoopingarner Jr., 69, of Sioux City, died Friday, Sept. 28, 2018, at a local hospital after a brief illness. Services will be 10 a.m. Thursday at St. Boniface Worship Site (Cathedral of the Epiphany Parish). Per his wishes, the body will be cremated following the mass. Visitation will be 4 to 7 p.m. Wednesday, with the family present from 5 to 7 p.m. and a vigil service at 7 p.m., at Larkin Chapel, Christy-Smith Funeral Homes. Norman was born in Sioux City, on Nov. 12, 1948, the son of Norman and Georgetta (Fisher) Hoopingarner Sr. He attended Sioux City Catholic Schools before transferring to Central High School, from where he graduated in 1968. At a young age he was baptized into the Catholic faith. Norman proudly served his country as a member of the U.S. Army during the Vietnam War, and was stationed in Korea as an MP. Following his discharge, he began working for the City of Sioux City, where he worked for 43 years in the street department. Norm loved spending time with his family and enjoyed fishing with his brothers and spending time at Soddy's when John was young. He enjoyed watching the Buffalos, playing his guitar, walking to work every day, music, and his motorcycles. Norman is survived by his loving wife of 47 years, Vickie; his son, John and his wife, Holly; his two grandsons; his mother, Georgetta; brothers, Jeff and his wife, Cheryl, and Tom and his wife, Sherry; sisters, Sally Nelson and her husband, Frank, and Lisa Cline and her husband, Dave; many nieces, nephews, grandnieces and nephews, and a great-grandniece. Norman was preceded in death by his father, Norman Sr.; his in-laws, Donna and Tony Stevens; his grandparents, Amy and Alfa Fisher; his brother-in-law, Charles Lindberg; a sister-in-law, Connie Dyer; and a grandnephew, Jaxon.

Norman L. Hoopingarner Jr., 69, of Sioux City, died Friday, Sept. 28, 2018, at a local hospital after a brief illness. Services will be 10 a.m. Thursday at St. Boniface Worship Site (Cathedral of the Epiphany Parish). Per his wishes,... View Obituary & Service Information

The family of Norman Hoopingarner Jr. created this Life Tributes page to make it easy to share your memories.

Send flowers to the Hoopingarner family.