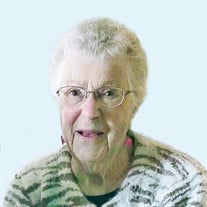 Not sure what to send?

Norma Jean Zettle, age 90, of Sioux City, passed away peacefully and surrounded by family in her home on Thursday, May 12. Funeral services will be 12:30 p.m. Wednesday, May 18, at Christy-Smith Funeral Homes, 1801 Morningside Ave. Sioux City, IA 51106. Visitation will begin at 11:30 a.m. Almost no one called her Norma—she was Jean, Jeannie, Mom, Grandma, Nana, Mrs. Zettle, and, for a good part of ten years, Grandma Lucy. Jean was born December 22, 1931, in Cainsville, Missouri to Rex and Mildred (Coon) Ross. Jean and her parents moved to the Des Moines, Iowa, area when she was a child, and she stayed there until 2011. Jean worked in education and healthcare for most of her life before retiring in her early 70s to dedicate time to caring for great-grandchildren and volunteering in her church (and a bit of shopping). Though we mourn our loss, Jean asked that we rejoice and take solace in knowing that she is home now, reunited with lost family and friends, in God’s care. Jean is preceded in death by her parents, Mildred (Coon) and Rex Ross; her daughters, Deborah White and Joi Perry; and her grandson, Daniel Perry, III. Jean is survived by three grandchildren, Travis Perry, Abbie Fahrendholz, and Jeri Perry and her husband Ted Brown; seven great-grandchildren, Bailee, Bradyn, and Colten Fahrendholz, Daniel and Brynlee (Perry) Huseman, Emmitt and Nora (Perry) Brown; and an extended family too numerous to list. Jean asked that in lieu of sending flowers donations be made in her remembrance to St. Jude’s Children’s Hospital.

Norma Jean Zettle, age 90, of Sioux City, passed away peacefully and surrounded by family in her home on Thursday, May 12. Funeral services will be 12:30 p.m. Wednesday, May 18, at Christy-Smith Funeral Homes, 1801 Morningside Ave.... View Obituary & Service Information

The family of Norma Jean Zettle created this Life Tributes page to make it easy to share your memories.