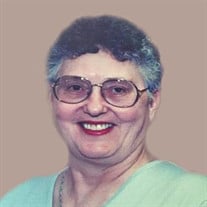 Norma L. King, 83, died Wednesday, September 22, 2021, at MercyOne Medical Center in Sioux City, IA. A visitation will be from 2:00 pm to 4:00 pm Sunday, September 26, 2021, at Christy-Smith Funeral Homes, Morningside Chapel, 1801 Morningside Avenue. A funeral service will be held on Monday, September 27, 2021, at 10:30 am at Christy-Smith, Morningside, with burial in Grant Township Cemetery near Rodney, IA. Online condolences may be expressed to the family at www.christysmith.com. Norma Laverne Hewitt, the daughter of Claire and Josephine (Ferdig) Hewitt was born August 16, 1938, in Rodney, IA. She graduated from Smithland High School in 1956. On June 6, 1959, Norma was united in marriage with Jay King. She was employed as a bookkeeper at Hirschbach Transportation, Sherman Produce, and then retiring from Winer and Associates in McCook Lake, SD. Norma is survived by her sons, Mark (Jacki) of Marshfield, WI, Jerry (Barb) of Sioux City; eight grandchildren; four great-grandchildren; siblings, Jan (Lynda) Hewitt of Sergeant Bluff, IA, Joetta Burkhart of Sioux City; and many other relatives and friends. She was preceded in death by her parents and her husband, Jay. The family has requested that memorials be directed to the Sioux City Humane Society.

The family of Norma Laverne King created this Life Tributes page to make it easy to share your memories.

Send flowers to the King family.