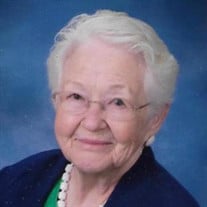 Virginia Noreen Ebaugh, age 87, of Sioux City, passed away Monday, April 26, 2021 at a local hospital. Arrangements are pending with Christy-Smith Funeral Homes, Morningside Chapel. Funeral service will be 1:00 p.m. Tuesday, May 4, 2021 at Morningside Lutheran Church. Visitation with the family present will be held one hour prior to the service at the church. Burial will be at Memorial Park Cemetery following the service. Noreen, as she was known by friends and family, was born May 17, 1933, on her grandparents’ farm near Mapleton, IA in Center Township, Monona County. She moved to Sioux City with her parents when she was very young. She married Robert Lyle Ebaugh on March 12, 1954, at Morningside Presbyterian Church. They lived in Sioux City all their lives until his death in March 1993. Noreen was a devoted mother to their four children. Noreen worked for the Boy Scouts of America office in Sioux City for 13 years & for the Sioux City Schools Food Service for 27 years. She retired in 2011 to spend more time with her family & enjoying life in general. Noreen enjoyed reading, doing crossword puzzles, playing computer games like Solitaire, & playing with her great-grandchildren. She was an avid Musketeers fan and loved going to their games. She was a season ticket holder. She also was a Chicago Bears fan. Survivors include her children, Bradley Robert (Beverly) Ebaugh of Sioux City, IA, Douglas Ebaugh of Alton, IA, Thomas Ebaugh of Sioux City, IA, and Annette (Steve Edblom) Sjaarda of Alton, IA; six grandchildren; 2 step grandchildren; several great-grandchildren and step great-grandchildren; her sister, Gail (Bill) Hastings of Greenwood, SC; her brother, Rex Martindale of Sioux City, IA; and several nieces and nephews. She was preceded in death by her parents, Merrill and Florence Martindale; her husband, Robert; and her sister, Roberta Smith.

The family of Noreen Virginia Ebaugh created this Life Tributes page to make it easy to share your memories.

Send flowers to the Ebaugh family.