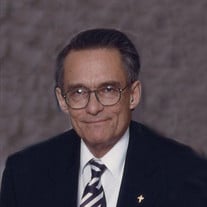 Norbert Eugene Seebach, 82, of Sioux City, died Wednesday, Feb. 6, 2019, at a Sioux City hospital. Services will be 11 a.m. Thursday at St. Paul's Lutheran Church, 624 Jennings St., in Sioux City, with the Rev. Kenny Hsu officiating. Interment will be in Memorial Park Cemetery. Visitation will be 4 to 8 p.m. today, the family will be present 6 to 8 p.m. and a prayer service at 7 p.m., at Morningside Chapel, Christy-Smith Funeral Homes, 1801 Morningside Ave., in Sioux City. Online condolences may be made to the family at www.christysmith.com. Norbert was born on May 16, 1936, in Northfield, Minn., to Rev. Norman and Mildred (Langhans) Seebach. The family moved several times while he was growing up when his father was called to pastor a new church. He graduated in 1953 from Concordia High School in St. Paul, Minn., attended Concordia College in St. Paul for a year then transferred to Worthington Junior College. Later in life, he attended the University of South Dakota earning a business degree in 1971. He married Vernice Renken June 7, 1964 at Christ Lutheran Church rural Le Mars, Iowa. He worked for KCAU Channel 9, Russell Miller Feed Mill and Grants Department Store before retiring in 1982. He had been a St. Louis Cardinals baseball fan since 1946. He was a member and faithful servant of St Paul's Lutheran Church, a member of the church choir and attended Bible study regularly. Surviving are his wife, Vernice Seebach of Sioux City; brother, Gerald and Judy Seebach of Lexington, Ky.; sister-in-law, Verona Lubben of Le Mars; two brothers-in-law, Dennis Shaltanis of Ankeny, Iowa, and Earl Dean Frieden of Shickley, Neb.; one niece; and six nephews. He was preceded in death by his parents; his in-laws; sister, Judith Shaltanis; brother-in-law, Earl Lubben; and sister-in-law, Velda Frieden.

The family of Norbert Seebach created this Life Tributes page to make it easy to share your memories.

Send flowers to the Seebach family.