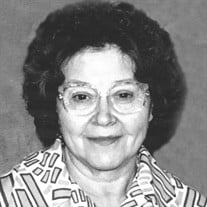 Neva Charlotte Nickum, 93, died Tuesday, Nov. 26, 2019, at Prairie Estates in Elk Point, S.D. A graveside service will be at 2 p.m. Wednesday at Memorial Park Cemetery in Sioux City. Christy-Smith Funeral Homes, Morningside, is assisting the family with arrangements. Neva was born on Nov. 10, 1926, in Homer, Neb., to Harvey and Mary (Nelson) Beardshear. She grew up in Homer, along with her parents, two sisters, Vera and Leah, and two brothers, Dale and Lorn. She graduated from Homer Community Schools. While working in a Sioux City restaurant, Neva met her one true love, Roy. They were united in marriage on Jan. 20, 1945, in Sioux City. They later moved to McCook Lake, S.D. They were blessed with two children, Karaleen (Bob) Finley and Larry (Janet) Nickum; five grandchildren; and eight great-grandchildren. Roy passed away on May 7, 2014. They were married for 69 years. Neva had numerous jobs during her lifetime, but she was well known as an excellent seamstress. Neva attended the Seventh Day Adventist Church. She enjoyed playing the piano, reading, and doing puzzles. She loved spending time with her family and her friends. Neva was preceded in death by her parents; husband, Roy; sisters, Vera and Leah; and brothers, Dale and Lorn.

The family of Neva Charlotte Nickum created this Life Tributes page to make it easy to share your memories.

Send flowers to the Nickum family.