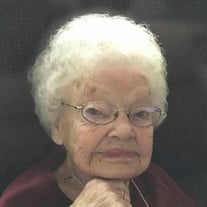 Naomi Agnes Pettit, 103, a lifelong resident of Sioux City, passed away on Monday January 31, 2022. Visitation will be 4-8 pm Friday, February 4, at Christy-Smith Funeral Homes, Morningside Chapel. Funeral Service will be at 11am Saturday at Faith United Presbyterian Church with Rev. David Koehler officiating. Burial will be in Graceland Park Cemetery immediately following. On-line condolences may be left at www.christysmith.com Naomi was born June 13, 1918 as Naomi Agnes Molden. She lived on Cedar Street with her mother, father and 4 siblings through her grade school and high school years. She attended Whittier School and graduated from East High School in 1936 with honors. Naomi married her high School sweetheart, John Richard Pettit, in 1940 and they lived together in Sioux City until John left for the Navy after the bombing of Pearl Harbor. During World War II, she worked as a PBX operator for the US government. When the war ended, Naomi and John settled down in their house on Fourth Avenue in Morningside. They began to build their five-person family in 1947 with the birth of their son Gary, followed by daughter Lynn in 1948, and son Dean in 1949. It was always clear that Naomi and John had tremendous love for each other, and the example that they set was tremendously important to the lives of their kids. In 1954, the family moved one block north to 4509 Third Avenue where the family home remained until Naomi moved into the Sunrise Retirement Center in 2018. The family loved the life that they had on Third Avenue in Morningside where they were surrounded with many other families and relatives that had the same family values and believed that the lives and futures of their kids was their most important responsibility. The family would always walk to church, schools, stores, and most friends’ houses. During the sixties, Naomi began to work at the S and H Green Stamp Store in downtown Sioux City and rode the bus each way for a dime. She was the manager of that store until her retirement in the 1980s. Together, with John, they devoted their lives to family, church and community. She was also a seamstress, bowler, great golfer and expert card player. She loved watching sports and spending time with her many grandchildren and great-grandchildren. Naomi and John drove all over the Midwest to attend every possible athletic event of their children and grandchildren. They missed very few basketball, baseball, football, and track meets that involved members of their family. They were also lifetime supporters of the athletic events of East High School and Morningside College. Naomi was a lifelong Member of Morningside Presbyterian Church, which has now become Faith United Presbyterian Church in Morningside. In 1923, at the age of 5, she marched down Morningside Avenue with other church members as the church moved 3 blocks west to the current church location at 4327 Morningside Avenue from the original building location around Morningside Avenue and Lakeport Road. At the time of her death, Naomi was the oldest living member of Faith United Presbyterian Church. Naomi and John were blessed with wonderful Christian beliefs which were instilled in them from their parents and they, in turn, passed them on to their children. Naomi is survived by her three children, Gary Pettit and his wife, Carol of North Carolina, Lynn Pettit Olison and her husband Ben of Concord, California and Dean Pettit of Grundy Center, Iowa; grandchildren, John Pettit and his wife Tracey, Kari Marsland-Pettit and her husband John, Nicole Conway and her husband Blake, Deena Pettit Rose and her husband Brian, Alana Olison, Amy Drake and her husband Brian and Krista Letzring and her husband Jordan; and 11 great-grandchildren. She was preceded in death by her husband, John, in 2007 as well as her parents, Richard and Agnes Molden, and siblings Bud Molden, Don Molden, Louise Wingfield, and Anita Rose Molden. The family suggests memorials to Faith United Presbyterian Church.

Naomi Agnes Pettit, 103, a lifelong resident of Sioux City, passed away on Monday January 31, 2022. Visitation will be 4-8 pm Friday, February 4, at Christy-Smith Funeral Homes, Morningside Chapel. Funeral Service will be at 11am... View Obituary & Service Information

The family of Naomi Agnes Pettit created this Life Tributes page to make it easy to share your memories.

Send flowers to the Pettit family.