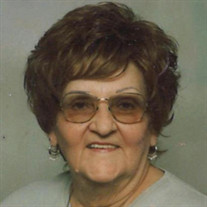 Naomi Butcher, 86, of Elk Point, S.D. peacefully entered eternal life on May 10, 2020 at a Sioux City hospital. Services will be 10:30 a.m., Saturday, May 16, 2020 at Christy-Smith Funeral Homes, Morningside Chapel. Visitation will be 9:30 a.m. until service time. Burial will follow funeral at Memorial Park Cemetery. Naomi was born July 30, 1933 to Sidney Todd in Jackson, NE. Naomi’s father Roy Todd died before she was born, therefore, she had never known her father, which she always regretted and always said she would meet him in heaven. Naomi, her mother, three sisters and one brother moved to So. Sioux City, NE shortly after she was born. Naomi attended school in So. Sioux City and when she was seventeen, she met and married Ward Butcher from Moville, IA. Naomi and Ward had 2 daughters and 2 sons. Naomi was a homemaker and devoted loving mother to her children while they were growing up. In 1970 she went to work at Soo Bee Honey and retired from there 25 years later. Ward retired from Marx Truck Line in 1995, and they joined the Good Sam’s R.V. Club. They began to travel in their R.V. with these good friends. They would go down south during the winter months and return home come spring. Naomi is survived by her 4 children; Sandra Butcher of Sioux City, IA; Roland (Nancy) Butcher of Louisville, KY; Karen (Stuart) Nissen of Elk Point, SD; Marty (Brenda) Butcher of Lincoln, NE; 12 grandchildren; 24 great grandchildren; sister: Grace Church of Sioux Falls, SD and her loving cat, Lany. Naomi was preceded in death by her husband; her parents; 2 sisters: Ida Knoph and Nell Todd; brother: Ernest Todd.

The family of Naomi Ruth Butcher created this Life Tributes page to make it easy to share your memories.

Send flowers to the Butcher family.