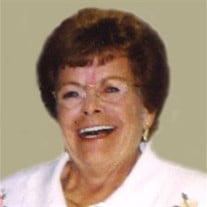 Nancy L. Johnson, 85, of North Sioux City, died Wednesday, June 19, 2019, at her residence in North Sioux City. Service will be 2 p.m. Monday at Christy-Smith Funeral Homes, Morningside. Following the service, burial will be in Memorial Park Cemetery. Visitation will be one hour prior to the service. Nancy Lee Lyons, the daughter of Clark and Leota (Hurth) Lyons, was born Feb. 14, 1934, in Banner Township, Iowa. She graduated from high school in Moville, Iowa. On July 31, 1953, Nancy was united in marriage with Lloyd E. Johnson in Moville. They spent 65 wonderful years together. She was a mother and homemaker. The couple moved to North Sioux City in 1997, after Lloyd’s retirement. Lloyd died June 14, 2018. After a year of missing him dearly, Nancy and Lloyd are now together again. She was a member of St. James United Methodist Church. Nancy loved to cook for others. Everyone had a friend in Nancy, and her door was always open. We all loved her brownies. Nancy had coffee and cookies with her neighbors every morning at her home, right up until the day she passed away. She was a wonderful hostess. She also had a special group of friends at Beano and Sherry’s Casino that she would visit with in the afternoon. Family and friends were always very important to Nancy. Nancy is survived by her sons, Doug and his wife, Linda of Bronson, Iowa, David and his wife, Shirley of Bronson, Paul and his partner, Jim Geaghan of Omaha, and Tim Williams of Sioux City; seven grandchildren; 11 great-grandchildren; two brothers, Bob (Mary) Lyons and Alvin "Sonny" Lyons (Diana), all of Sioux City; and many nieces and nephews. She was preceded in death by her parents; her husband, Lloyd; her son, Tom Williams; and four sisters, Mary Teutch, Ethel Berne, Doris Madsen, and Marjorie Williams.

The family of Nancy Lee Johnson created this Life Tributes page to make it easy to share your memories.