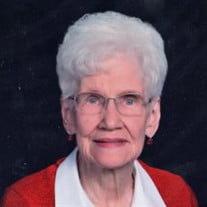 Muriel M. Nelson, 94, entered into rest Thursday, August 27, 2020, at her residence in Sioux City, IA. A funeral service will be 11:00 am Monday, August 31, 2020, at Christy-Smith Funeral Homes, Morningside Chapel, 1801 Morningside Ave., with visitation one hour prior. Muriel Marie Nelson was born April 7, 1926 to John Alfred Sandquist and Anna (Bordson) Sandquist in Oakland, NE. Muriel grew up in the Oakland community, attended school in Oakland and graduated from Oakland public schools in 1943. Muriel was employed in a secretarial position briefly in Omaha and then returned to Oakland where she worked for Holmquist Grain & Lumber Co., approximately four years, doing stenographic and bookkeeping work. She married J. Warren Nelson on October 14, 1947 in Oakland after he had returned from military service. To this union were born three children: John Timothy, Lori Ann, and Ward Brian. After farming west of Oakland for more than a decade, the family moved to Sioux City, IA in February of 1960, one reason being a desire for their children to attend Morningside Christian School (currently Siouxland Christian School). In Sioux City, Muriel was employed with Ralph Jansen Associated Sales from 1964 until her retirement in 2010. Warren passed away February 22, 2009. The couple were members of Central Baptist Church in Sioux City. Muriel is survived by John and Kathleen Nelson of Houghton, NY, Lori and Dick Salem of Sioux City, and Ward and Paula Nelson of Ankeny, IA; eleven grandchildren; 18 great-grandchildren; one great-great-grandchild; and many nieces and nephews. Preceding her in death were her husband, Warren; her parents; a sister, Lucille Nelson; two brothers and their wives, Ellert and Millie Sandquist and Raymond and Luetta Sandquist; a grandson, Aaron Nelson; a nephew, Danny Nelson; and a brother-in-law and his wife, Laurence and Allegra Nelson. In lieu of flowers, the family has requested that memorials be directed to Hospice of Siouxland.

The family of Muriel Marie Nelson created this Life Tributes page to make it easy to share your memories.