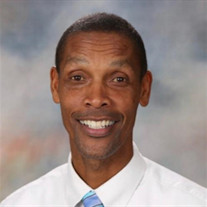 Dr. Michael J. Rogers, 52 of South Sioux City, Nebraska died on Thursday, March 7, 2019, surrounded by his family. A funeral service will be at 10:30 AM on Saturday at East High School. The family will receive friends from 5:00 PM to 7:00 PM on Friday, March 15, 2019, at East High School, Sioux City, Iowa. A prayer service will follow at 7:00 PM. Online condolences may be made to the family at www.christysmith.com. Michael was born November 30, 1966 in Knoxville, Tennessee. He was the son of William L. and Alverta (Bryant) Rogers. His father was a Chief Master Sergeant in the Air Force so the family moved several times while he was growing up. He graduated from Bellevue West High School in Bellevue NE in 1985. He continued his education at Platte Community College in Columbus, NE where he met the love of his life, Dawn Hermelbracht. He graduated from Platte Community College in 1987, then attending Dakota Wesleyan and graduated in 1990. Later that same year he married Dawn on July 21st in Omaha, NE. Mike started working for the South Omaha Boys Club as an activities director while attending University of NE Omaha and working on his masters. He graduated in 1992 and took a job with the Sioux City Community Schools at West Middle School. Mike has served as an administrator in various Sioux City Community Schools since 1993, most recently at East Middle. Serving Christ was number one in Mike’s life and that was evident in how he lived, and was visible to all who met him. He was an active member of Morningside Assembly of God teaching several Sunday School classes and was a commander for Royal Rangers. He had the pleasure of serving on the Board of Trustees for DWU for 12 years and was inducted into the DWU Athletic Hall of Fame in 2007. He was named Central Community College (Platte) alumni of the year in 2005. In 2016 Mike was named Iowa After School Program Principal of the Year and in 2017 he received the Courage to Teach Award during Tolerance Week. Mike coached numerous of his sons’ youth teams throughout the years and enjoyed refereeing with his youngest son Nate. He loved being “all time quarterback” at recess and talking to his students at lunch. His impact in this community will be felt for years to come. The love he had for his family, friends, students and staff will never be matched and he will be dearly missed. Surviving are his wife, Dawn of South Sioux City, NE; two sons, Taylor Rogers of Des Moines, IA and Nate Rogers and his fiancé Haley Vesey of Wayne, NE; father, William Rogers; three sisters, Terry (Dennis) Rogers Womack, Shirley Rogers, and Ginger Rogers; a brother, Larry (Sharon) Rogers; his in-laws, Richard and Marlene Hermelbracht; a brother-in-law, Marlo (Diana) Hermelbracht; sister-in-law, Danna (Todd) Henningfeld; along with many nieces and nephews. He was preceded in death by his mother Alverta Rogers In lieu of flowers memorials may be directed to the Dr. Michael Rogers Memorial fund C/O Peoples Bank of Sioux City.

Dr. Michael J. Rogers, 52 of South Sioux City, Nebraska died on Thursday, March 7, 2019, surrounded by his family. A funeral service will be at 10:30 AM on Saturday at East High School. The family will receive friends from 5:00... View Obituary & Service Information

The family of Dr. Michael Rogers created this Life Tributes page to make it easy to share your memories.

Send flowers to the Rogers family.