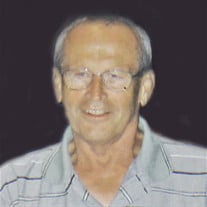 Michael W. Montgomery, 81, died Monday, January 13, 2020, at MercyOne Medical Center in Sioux City, IA. A memorial service will be 6:00 p.m. Monday, January 20, 2020, at Christy-Smith Funeral Homes, Morningside, with visitation one hour prior. Michael William Montgomery, the son of Phil and Catherine (Hogensen) Montgomery was born July 18, 1938, in Sioux City, IA. He graduated from Bishop Heelan High School in 1956. Michael then enlisted in the U.S. Marine Corps and served honorably until 1959. In 1959, Michael was united in marriage with Berniece Monroe in Sioux City. In 1961, he enlisted in the U.S. Army. Michael then went on to enlist in the U.S. Air Force. He held various jobs throughout his life, ultimately retiring from Nutra-Flo in 2003. After his retirement, Michael was employed part-time with the Sioux City Journal. Michael was a member of the American Legion. He enjoyed fishing and bowling. Michael is survived by his former wife, Berniece Benjamin of South Sioux City, NE; his sons, Mike (Chris) of Sioux City, Brady (Pam) of Hinton, IA, Randy (Kathy) of Dakota City, NE, Matt (Kristi) of Dakota City; a stepdaughter, Katrina (Kyle) Dreas of Aurora, CO; 13 grandchildren; 18 great-grandchildren; a sister, Bobbi (Bud) Powell of San Diego, CA; a nephew, Ryan Montgomery of Grand Junction, CO; and many other relatives and friends. He was preceded in death by his parents; a brother, Pat Montgomery; and his stepfather, Charles “Whitey” Walker.

The family of Michael William Montgomery created this Life Tributes page to make it easy to share your memories.

Send flowers to the Montgomery family.