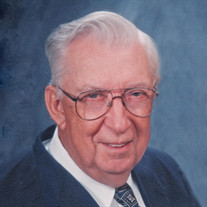 Michael George Furlich, 99, of Sioux City, passed away Wednesday, Nov. 14, 2018, at a Sioux City hospital, surrounded by family. A memorial service and interment will be at a later date. Arrangements are under the direction of Morningside Chapel, Christy-Smith Funeral Home. Michael was born Sept. 11, 1919, in Omaha, Neb., the son of George and Mary Catherine (Basar) Furlich. He graduated from Omaha South High School. He served in the United States Army, Seventh Armored Division in World War II, participating in the Battle of the Bulge and the Battle of St. Vith. He was awarded the Bronze Star for Meritorious Service, The Presidential Unit Citation, Belgian Fourragere, French Croix de Guerre and French Foreign Legion of Honor. He was a member of the Seventh Armored Division Association. He served as an altar boy as a youth and again while serving in the Army in France and Germany during World War II Michael was an installer and later an installation supervisor for Western Electric Company, a division of the Bell System, for 40 years. He married Gladys G. Griggs on Oct. 25, 1947, in Omaha. She passed away Jan. 29, 1988, in Sioux City. He was united in marriage to Ellen Stapleton Shulenberger on July 8, 1995, in South Sioux City. They made their home in South Sioux City. She passed away on March 25, 2017. Michael was a member of St. Michael Catholic Church. He enjoyed traveling, playing golf, bowling and he was an award-winning amateur photographer. He was an avid Nebraska Cornhuskers fan. Left to cherish his memory are his two daughters, Catherine Furlich and her husband, Pat Hogan of Torrance, Calif., and Barb Furlich of Sioux City; a son, Douglas Furlich of Concord, Neb.; a sister, Dorothy Wright; a sister-in-law, Laverne Hiemstra; two nephews, Mark Griggs and Michael Wright; three nieces, Michaela Wright, Michelle Wright and Karen Cannaley; four grandchildren; one great-granddaughter; four great nephews; four great nieces; two great grandnephews; and one great grandniece. He was preceded in death by his parents; his first wife, Gladys Griggs Furlich; his second wife, Ellen Shulenberger-Furlich; a son, Michael Furlich; a daughter, Mary Furlich; and three sisters, Clara, Frances and Mary Catherine Furlich. Honorary urn bearers will be his grandchildren, Holli Thornton, Amanda Furlich, Adam Furlich and Abigail Furlich. In lieu of flowers, the family would like you to consider making a memorial in Michael’s name to the 7th Armored Division Association at Cheryl Higley, 292 Scott Swamp Rd., Farmington, CT 06032. Michael was able to see humor in many situations. He will be missed.

Michael George Furlich, 99, of Sioux City, passed away Wednesday, Nov. 14, 2018, at a Sioux City hospital, surrounded by family. A memorial service and interment will be at a later date. Arrangements are under the direction of Morningside... View Obituary & Service Information

The family of Michael Furlich created this Life Tributes page to make it easy to share your memories.

Send flowers to the Furlich family.