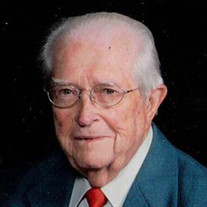 Melvin G. “Mel” Forsling, 96, died Wednesday, March 10, 2021 at his residence in Sioux City, IA. A visitation will be 4:00 pm to 6:00 pm Sunday, March 14, 2021, at Christy-Smith Funeral Homes, Morningside Chapel, 1801 Morningside Ave., with a prayer service at 5:30 pm. A funeral service will be 11:00 am Monday, March 15, 2021, at Redeemer Lutheran Church with burial in Memorial Park Cemetery. Due to construction at the church, please enter at door number “6”. Melvin G. “Mel” Forsling, the son of Carl and Irene Forsling was born August 25, 1924, in Sioux City, IA. He graduated from Central High School in 1944. Mel enlisted in the U.S. Army and served in the Ardennes Forest during The Battle of the Bulge in World War II. He was a communications officer and was honorably discharge in 1946. On August 21, 1948, Mel was united in marriage with Elaine Krom at St. Paul’s Lutheran Church in Sioux City. He graduated from Wayne State College with his teaching degree. As the children grew up, Mel would apply for school grants to travel to other schools to study and also teach. The family took these “vacations” to such places as Bemidji, MN, Colorado, and Seattle, WA. Mel’s first full-time teaching position was in Smithland, IA, serving as principal, teacher, and bus driver. The family moved to Sioux City in 1955, where he taught at various schools, but mainly at East High School. After his retirement, Mel sold solar panels, taught at WITCC, substitute taught, and even got into Real Estate. Elaine died July 20, 2017. Mel was a member of the Lions Club, VASA (a Swedish heritage group), The American Legion, and sang with the Siouxland Barber Shoppers. He also served on church committees at both St. Paul’s Lutheran and Redeemer Lutheran. He enjoyed duck hunting and was an avid licensed ham radio operator, which steered him into his communications position in the Army. Mel is survived by his daughter, Lynne (Rich) Draper of Omaha, NE; son, Steven Forsling of Grand Junction, CO; grandchildren, Kamden Draper, Kaley Draper, Dustin Forsling, and Angel Gentry; five great-grandchildren; and many other relatives and friends. He was preceded in death by his parents; wife; and a half-brother, Glen. In lieu of flowers, the family has requested that memorials be directed to Redeemer Lutheran Church or Sunrise Retirement Community.

The family of Melvin G. "Mel" Forsling created this Life Tributes page to make it easy to share your memories.

Send flowers to the Forsling family.