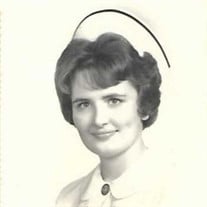 Maxine Kilstrom, age 76, formerly of Sioux City, passed away Monday, October 26, 2020 in Viborg, SD. A memorial service will be 2:00 p.m. Saturday, November 7, 2020 at Christy-Smith Funeral Homes, Morningside Chapel, located at 1801 Morningside Ave in Sioux City, IA. Visitation will be held one hour prior to the service. Maxine Elizabeth Kaufman, the daughter of Frank and Vivian (Hansen) Kaufman, was born January 9, 1944 in Earling, IA. She graduated from Shelby-Tennant High School in Shelby County, IA in 1962. She went on to attend Mercy School of Nursing in Council Bluffs, IA where she graduated from in 1964. Maxine was married to Dennis Kilstrom in 1965. The couple had three children together, they made their home in several states. Maxine moved to Sioux City in 1975 where she lived for 45 years. She worked at St. Luke’s Hospital for 30 years. During that time, she received her BSN from Briar Cliff College in Sioux City. She then received her MSN from South Dakota State University in Brookings, SD. After retiring from St. Luke’s Hospital, she traveled working as a nurse manager for several years and teaching nursing at Briar Cliff College before moving to Sioux Falls, SD in 2015. Maxine took great joy in her grandchildren. Encouraging them to follow their bliss and travelled with them as often as she could. One of her favorite personal travel destinations was Houston, TX, where she would spend time with her daughter Jennifer and her grand cats. She had a lifelong joy of learning, music, art, and photography. She took pleasure in mentoring and encouraging growth in her employees and students. Even as dementia took over her mind, she found happiness in the belief that she was still at work teaching those who were caring for her. Maxine is survived by her children, Brian Kilstrom of Dakota City, NE, Stephanie Gavin of Sioux Falls, SD, Jennifer Kilstrom of Houston, TX; grandchildren, Lauren Kilstrom, Tyler Gavin, Thomas Gavin, Jessica (David) Bates, Zachary Kilstrom; three great-grandchildren; siblings, David Kaufman, Marlene Rockwell; many nieces, nephews, and godchildren; her special friend of many years, Joseph Alexander. She is preceded in death by her parents; siblings, James Kaufman, Dennis Kaufman. Her family sends a special note of love and gratitude to the healthcare professionals at Pioneer Memorial Nursing Home in Viborg, SD. In lieu of flowers donations can be made in Maxine’s name to Pioneer Memorial Foundation, PO Box 368, Viborg, SD 57070.

The family of Maxine Elizabeth Kilstrom created this Life Tributes page to make it easy to share your memories.

Send flowers to the Kilstrom family.