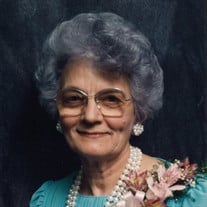 Maxine A. Hemingson, 97, of Sioux City, died Tuesday, Sept. 10, 2019, at a Sioux City hospital. Memorial service will be 1 p.m. Friday at St. James United Methodist Church in Sioux City. Online condolences can be made to the family at www.christysmith.com. Maxine Amy Burrow, the daughter of Leo A. and Mabel A. (Ferrin) Burrow, was born July 19, 1922, near Sumner, Iowa. She graduated from high school in Sumner in 1938. She attended Iowa State Teachers College (now University of Northern Iowa) for one year, majoring in music. On Jan. 29, 1943, Maxine was united in marriage with Warren Hemingson in Casper, Wyo. She returned home when he was sent to the Pacific during World War II and worked in Waterloo, Iowa. After the war, they settled in Frederika, Iowa, where their two daughters were born. They later moved to Chicago for her husband’s schooling and relocated to Ames, Iowa, where their son was born. The couple moved to Sioux City in 1963, and Maxine worked for the Livestock Exchange as a secretary. Warren died in December of 1969. Maxine retired in 1987. Maxine was a member of St. James United Methodist, the United Methodist Women, and used to sing in the church choir. She was also involved in mission programs for the church as well as volunteering for Meals on Wheels. Her greatest interest was in her family, taking pride in each one as they grew. She enjoyed family activities, especially volleyball games held at her house, family reunions, and holidays. She enjoyed visiting her son and daughter-in-law in Hawaii before their move to Nashville, Tenn. She never turned down a chance to attend a Tim McGraw concert so she could see her son play guitar. She also enjoyed reading, working crossword puzzles, listening to and playing music, and singing. Her words of encouragement and support of her children, grandchildren, and great-grandchildren are special memories. If family members needed help, she was always right there without hesitation. Maxine is survived by her children, Janice Blair of Sioux City, Joyce Ohl of Dakota Dunes, and Dennis (Diana) Hemingson of Springhill, Tenn.; grandchildren, Todd (Julie) Ohl of Dakota Dunes, Tammy Peterson of Sioux City, and Jason (Paula) Blair of Ham Lake, Minn.; and great-grandchildren, Bronwyn Ohl, Travis Ohl, Shyanne Peterson, Aleigha Peterson, Breonna Blair, and Jordan Blair. She was preceded in death by her parents; her husband; a sister, Virginia (Arnold) Bock; brothers, William (Hazel) Burrow and George (Betty) Burrow; a granddaughter, Angela Ohl; and son-in-law, John Blair. In lieu of flowers, we would invite you to contribute to mom’s favorite charity, Heifer Project, which helps people all over the world to become more self-sufficient through education in farming and animal care. We have established a link at https://fundraise.heifer.org/fundraiser/2460906.

Maxine A. Hemingson, 97, of Sioux City, died Tuesday, Sept. 10, 2019, at a Sioux City hospital. Memorial service will be 1 p.m. Friday at St. James United Methodist Church in Sioux City. Online condolences can be made to the family... View Obituary & Service Information

The family of Maxine A. Hemingson created this Life Tributes page to make it easy to share your memories.

Send flowers to the Hemingson family.