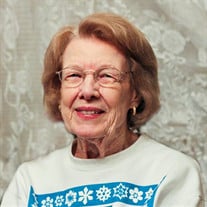 Mary C. Weingartner, 93, of Sioux City, died Wednesday, November 21, 2018 at a Sioux City hospital after a short illness. Services will be 10:30 a.m.,Thursday, November 29 at St. Patrick Catholic Church in Wakonda, S.D., with the Rev. David Roehrich officiating. Burial will be in St. Patrick’s Cemetery. Visitation will be one hour prior to service at St. Patrick Catholic Church. Mary C. Weingartner (Kay) was born December 22, 1924 on the W.A Dwyer homestead near Wakonda, Clay County, S.D., first child of John H. and Ella F. (Dwyer) Weingartner. She attended rural Pleasant Valley School for eight years. She graduated from Wakonda High School in 1942. After graduation from NBT Business College, Sioux City, in 1944, she went to work for Albertson’s, which later became Sioux Tools, retiring in 1986. She was a longtime member of Blessed Sacrament Catholic Church, Sioux City. Mary Kay enjoyed reading, taking long walks, and visiting with friends. Her family was the most important focus in her life. She made many charitable donations to local organizations and has left a memorial to Holy Cross Parish School and St. Patrick’s Cemetery maintenance fund. Survivors include one brother Russ Weingartner and his wife, Sue, of Helena, MT; and numerous nieces and nephews. She was proceeded in death by her parents; and siblings, Lorraine McClain, John Weingartner, and Irene Weingartner.

The family of Mary Weingartner created this Life Tributes page to make it easy to share your memories.

Send flowers to the Weingartner family.