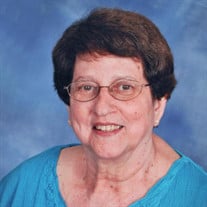 Mary Jolene “Mary Jo” Rubis, 80, passed away Sunday, March 27, 2022, at a hospital in Sioux Falls, South Dakota. A visitation will be 4:00 pm to 7:00 pm Wednesday, March 30, 2022, at Christy-Smith Funeral Homes, Larkin Chapel, 2320 Outer Drive N., with a Vigil Service at 6:30 pm. A Funeral Mass will be 10:30 am Thursday, March 31, 2022, at Holy Cross Parish-St. Michael Catholic Church. Burial will be in North Lawn Memorial Cemetery in Spencer, IA. Online condolences may be expressed to the family at www.christysmith.com. Live Streaming Links: https://www.facebook.com/holycrossparishsc/live/ https://holycrosssc.org/mary-jo-rubis-funeral Mary Jo Severson, daughter of Henry B. and Adlyn “Steffen” Severson was born February 10, 1942, in Spencer, IA. She grew up in Ruthven, IA, graduating from Ruthven high school. She furthered her education earning her degree from Briar Cliff College in Sioux City, IA. Mary Jo was united in marriage to Jerome Rubis on November 28, 1964, in Ruthven. They lived in Sioux City until 1976 when they bought an acreage south of Hinton. Mary Jo was a homemaker, raising the family and enjoyed attending many of her children’s activities and events. She was an avid gardener and loved to share her fruits, vegetables, and baked goods with family, friends, and the priest and residents at St. Michaels Church, where she was a devout member. She enjoyed get-togethers and having a good chat with family and friends. Later, she enjoyed many trips around the country with her friends. In the more recent years, she enjoyed watching the birds that were well fed in her back yard. She also enjoyed spending time with her grandchildren and loved to watch Carson build his Lego sets. She is survived by a daughter, Therese (Jeff) Kay of Holstein IA; two sons, Paul Rubis of Le Mars, IA and Brian (Stacy) Rubis of Le Mars, and their children, Hailey, Brandon and Aiden Kramer and Carson Rubis; a brother, Dave Severson of Spencer, IA; a brother-in-law, Thomas Rubis of Streetsboro, OH; and many cousins, nieces, nephews and their families. She was preceeded in death by her parents; her husband, Jerry (June 2014); a brother, Don Severson; a sister-in-law, Connie Severson; and a brother-in-law, Francis Rubis.

The family of Mary Jo Rubis created this Life Tributes page to make it easy to share your memories.

Send flowers to the Rubis family.