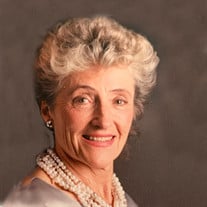 Mary Louise Malone, 92, passed peacefully on December 4th, 2019 surrounded by family in Paradise Valley, Arizona. Mass of Christian burial will be held at 10:30 a.m. on Monday, December 9 at Blessed Sacrament Catholic Church, with Father Jerry Cosgrove officiating. Burial will be at Calvary Cemetery. Visitation will be 4 to 8 p.m. at Larkin Chapel, Christy-Smith Funeral Home on Sunday, December 8. There will be a Rosary, led by St. Theresa’s Study Group, at 4 p.m. with a vigil service to follow at 7 p.m. Mary was born on June 14, 1927 in Denison, Iowa. She was the daughter of Frank and Bessie (Welch) Paup. She graduated in 1945 from Cathedral High School in Sioux City and met the love of her life, Thomas Ford Malone, at the Roof Garden on Lake Okoboji. On June 9, 1951, she married Tom at the Cathedral of the Epiphany and loved him for more than 62 years, giving birth to 10 children along the way. Mary and Tom were members of the Sioux City Boat Club and the Dakota Dunes Country Club. As an avid golfer, Mary proudly sunk a hole-in-one at Dakota Dunes and was awarded Irish Woman-of-the-Year for her influence in starting the Annual Irish Open at the Sioux City Boat Club. Mary valued being active; she ran marathons, hiked the mountains, and participated in the Missouri Raft Regatta. Mary was known for her prolific love of animals, be it a roadrunner she befriended in Palm Springs or the neighborhood dogs of Pierce Street in Sioux City. Mary will be remembered as a true woman of faith. She had special devotions to the Virgin Mary and St. Theresa of the Little Flower. She had an incredible ability to light up a room with her silent presence and patient demeanor. Refusing to speak ill of anyone, Mary brought kindness to every person along her journey. Ever proud of her Irish heritage, Mary had Irish wit and a sense of humor that spread joy to those around her. Mary’s greatest pleasure was faith and family. Left to always honor her memory are her children, Molly Malone Tursi and Frank Tursi of Des Moines, Iowa, Tom Malone and Sydney LaCourse Malone of Grimes, Iowa, Matt Malone of Bucyrus, Kan., Mike and Darla Malone of Austin, Texas, Martie Malone and Jon Starr of Denver, Colo., Peggy (Malone) Fagerland and Dr. Jeff Fagerland of West Des Moines, Iowa, Katie Malone Meador and Dr. Keith Meador of Nashville, Tenn., Liz Malone of Bucyrus, Kan., and Eileen Malone Hatfield and James Hatfield of Paradise Valley, Ariz. Her 28 grandchildren and nine great-grandchildren will continue to celebrate their memories with Grandma Malone. Mary was preceded in death by her parents; her husband, Dr. Tom Malone; her son, Patrick; her two grandchildren, Brendan and Bridgette Hatfield; and her brothers, Cliff and Lowell Paup. She led by example as a woman of grace with love for others, faith, and life. She never complained; all she requested in challenging times was “a few kind words.” She was a true inspiration to everyone in her life and will continue to touch the lives of others in her death. Per Mary’s request, a special thanks to all the tender loving care she received from Treyce Habura, Cathy Polinar, Mallori, Ashley and Ashley as well as all others who made her look and feel beautiful in her final days. When you think of Mary remember that she “loves you more.” Until we meet again may God hold you in the hollow of his hands. In lieu of flowers, a memorial has been established in her name at Blessed Sacrament Catholic Church and the Carmelite Monastery in Sioux City.

The family of Mary L. Malone created this Life Tributes page to make it easy to share your memories.

Send flowers to the Malone family.