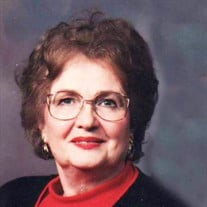 Mary Krusenstjerna Hall September 14, 1927 - January 27, 2022 Mary Hall, beloved wife of William Hall and loving mother of David, Pamela, and the late Gregory Hall, passed away surrounded by her family in her home on Thursday, January 27, 2022. Mary was born in Odebolt, Iowa, and grew up on the family farm where she was the youngest child of George and Jennie Krusenstjerna. Mary enjoyed her childhood with loving parents and two sisters, Florence and Margaret. She was involved in many school activities at Odebolt High School, with a special interest in music, sports, and public oratory competitions. She began her collegiate studies at Iowa State University. After 2 years, she moved to Greeley, Colorado to attend the University of Northern Colorado to pursue a degree in Elementary Education. During that time, she met her future husband, Bill Hall of Saranac Lake, New York, who was also studying to become a teacher. After receiving their degrees in education, Mary and Bill moved to Early, Iowa where they began their family. Mary was very happy teaching part time when her children were young. After teaching in several different grades, she decided she could have the greatest impact at the kindergarten level, using her gift of music. In 1965, Mary and Bill moved to Sioux City where Mary started her full time job as a kindergarten teacher at Longfellow Elementary School. She enjoyed her students greatly and the feeling was mutual. She received many accolades over the years for her lasting impact on students. Mary was also a dedicated mother who never missed an event her children participated in. She was very active in her children's lives, and that continued with her nine grandchildren. She had a nurturing spirit and loved to become involved any any game or activity. Mary was a faithful member of Morningside Presbyterian Church (now Faith Unity Presbyterian) for over 50 years. She was a church deacon, ran the church library, and was very involved in many church activities, including fellowship and capital fundraising. Mary also loved to assist with decorating the church and creating its floral arrangements. Flowers were one of Mary's passions and after retirement she and her husband made a great team. Bill was an active gardener and Mary arranged the beautiful flowers he grew. She also had a deep love of music and enjoyed singing with the Sweet Adelines. Mary enjoyed the arts in Sioux City and attended the Sioux City Symphony and Lamb Theatre whenever possible. Mary is survived by her loving husband of 73 years, Bill Hall, Dacey Hall (widow of son Gregory Hall) of Larchmont, NY, David (Patty) of Palmetto, FL, and Pamela Hall of Sioux City. Mary is also survived by nine grandchildren and nine great grandchildren. Mary was preceded in death by her loving son Gregory Hall whom she missed dearly. A service celebrating Mary's life will be held later this spring. In lieu of flowers, contributions in her name may be made to Faith United Presbyterian Church.

The family of Mary Hall created this Life Tributes page to make it easy to share your memories.

Send flowers to the Hall family.