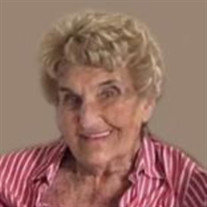 Mary M. Chesley, age 91, of Sioux City passed away Wednesday, November 3, 2021, in Sioux Falls, SD. Memorial service will be 1:00 p.m. Saturday, November 6, 2021, at Christy-Smith Funeral Home, Morningside Chapel located at 1801 Morningside Ave. in Sioux City. Visitation will be held one hour prior to the service. Burial will be held at a later date at Memorial Park Cemetery. Mary Maxine Noakes, the daughter of Elmer and Emily (Provost) Noakes was born on July 19, 1930, in Sioux City. She grew up in the area and graduated from Central High School. In 1948 Mary was united in marriage to Glenn Chesley in Sioux City for 73 years. The couple made their home in Sioux City. Mary was a homemaker for many years, raising her three sons, she later worked at Younkers. Mary was a member at Grace United Methodist Church. She loved golfing and baking. Mary is survived by her husband, Glenn Chesley of Sioux Falls, SD; sons, Rick Chesley and his wife Duwanna of Florida, Randy Chesley of Florida, Russ Chesley and his life partner Tim Knoblich of Sioux Falls, SD; grandchildren, Aaron, Jeremy, Jason; 7 great grandchildren; and sister-in-law, Judy Chesley. She is preceded in death by her parents; and sister, Faye.

The family of Mary Maxine Chesley created this Life Tributes page to make it easy to share your memories.

Send flowers to the Chesley family.