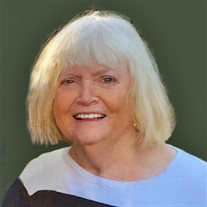 Mary Lou Callahan, 82 of Dakota Dunes, South Dakota died on Wednesday, November 6, 2019, at Mercy One Medical Center in Sioux City, Iowa. A Memorial service will be at 11:00 AM on Tuesday at Christy-Smith Morningside Chapel located at 1801 Morningside Ave. Sioux City, Iowa 51106 with Deacon Patricia Roberts officiating. Visitation will be from 4:00 PM to 8:00 PM and the family will be present from 6:00 PM to 8:00 PM on Monday, November 11, 2019, at Christy-Smith Morningside Chapel, 1801 Morningside Ave., Sioux City, Iowa. Online condolences may be made to the family at www.christysmith.com Mary was born September 6, 1937 in Sturgeon, Missouri to William & Onetta (Ornborn) LaForce. The family moved to a farm near Madison, MO. when she was four years old. She grew up on the family farm and attended school in Madison, graduating from Madison High School in 1956. Mary was united in marriage to Dan Callahan on August 6, 1960 in Moberly, MO. The first several years of marriage started in Missouri as Dan's coaching career began. In 1964 the couple moved to Iowa, first to Mason City, then in 1966 they moved to Des Moines area and to Sioux City in 1973. They returned to Moberly, Missouri in 1986. In 1992 Dan accepted a job with the Sioux City Public Schools. Dan and Mary were thrilled to be back in Sioux City near family and friends again. They retired in Dakota Dunes. While in Sioux City, Mary worked for Marian Health Center in the medical records department and later for Flowerland. Mary was always the cheerleader, whether it was for Dan, the kids, grandkids or the players on the many teams Dan coached. Mary was always there encouraging and supporting everyone. Many times she would welcome players into their home who were unable to go home for the holidays. Mary dedicated her life to her family. Survivors include her husband Dan of Dakota Dunes, SD, four children; Di Ann ( Darrell) Harrison of Monroe, SC. and their children; D.J. Harrison, Danielle (Mason) Harris, Marquise (Peir) Allen and Dillon Harrison., Dan (Kris) Callahan IV of Sioux City and their children; Daniel V and Megan, David (Angelique) Callahan of Canton, GA and their children; William, Brayden, Ava Callahan and Toby, Brody and Brock Thompson, Dana Chesterman of Dakota Dunes, SD and her children; Bennett and Sam. three sisters; Alberta Johnson of Columbia, MO, Betty Levings of Madison, MO and Beulah Embre of Castle Berry, FL along with numerous nieces and nephews. Mary was preceded in death by her parents and a sister Yvonne LaForce.

Mary Lou Callahan, 82 of Dakota Dunes, South Dakota died on Wednesday, November 6, 2019, at Mercy One Medical Center in Sioux City, Iowa. A Memorial service will be at 11:00 AM on Tuesday at Christy-Smith Morningside Chapel located... View Obituary & Service Information

The family of Mary Lou Callahan created this Life Tributes page to make it easy to share your memories.

Send flowers to the Callahan family.