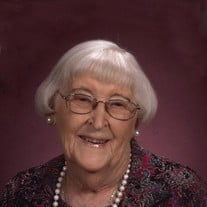 Mary Jane Anderson, 94, of Sioux City, died Friday, Jan. 31, 2020, at a Sioux City hospital, surrounded by her children and grandchildren. Services will be 10:30 a.m. Saturday at St. Michael Catholic Church of the Holy Cross Parish, 2223 Indian Hills Drive, in Sioux City, with the Rev. David Hemann officiating. Entombment will be in the Mausoleum of the Resurrection at Calvary Cemetery. Visitation will be 4 to 8 p.m. Friday, with the family present 6 to 8 p.m., a rosary at 6:30 p.m. and a prayer service at 7 p.m. with Deacon Kevin Poss, at Larkin Chapel, Christy-Smith Funeral Homes, 2320 Outer Drive, in Sioux City. Online condolences may be made to the family at www.christysmith.com. Mary Jane was born on Oct. 8, 1925, in Emerson, Neb., to Daniel and Mary Helen (Crahan) Sheehan. She graduated from Emerson High School and went on to St. Joseph College of Nursing. She was employed at St. Joseph's Hospital as a RN. She mainly worked in the obstetrics department and worked on the medical floor. Mary Jane married Richard E. Anderson at Sacred Heart Catholic Church in Emerson, on Dec. 30, 1947. Richard and Mary made their home in Sioux City and raised seven children. Mary ended her nursing career after the birth of her fifth child and became a dedicated stay-at-home mom. While juggling a career and family, Mary was also a very active member of St. Joseph Catholic Church, which she was a member of since 1948. Mary helped set up the financial council, served as president of the Guild, a parish representative of the Council of Catholic Women, a Carmel Board member for 25 years serving as secretary and vice president, and sang in the senior and funeral choirs. Mary also served on the Heelan Parents Board. She was a volunteer at the Soup Kitchen and at Queen of Peace Shrine. Mary regularly attended Fatima prayer group at Cathedral. In her last years, Mary Jane attended St. Michael Catholic Church of the Holy Cross Parish. Mary enjoyed going to daily mass at the Queen of Peace or at the Cathedral, where she made many new friends. Mary Jane loved spending time with family. Many joyous holidays were spent in her and Richard's home, where they would host their family for Thanksgiving, Christmas, Easter, Fourth of July, and any other reason she could find to unite and enjoy her family. Mary loved a big family celebration, especially one that ended with a fierce game of Pass the Aces, where the entire family, from the little ones to the elders, would sit around the table laughing and hoping to avoid "the bunny." Mary also enjoyed going to events (she attended a good many sporting events in her lifetime) that her children and grandchildren participated in. Mary's favorite pastime was as an avid researcher of family genealogy. In her free time, Mary could be found on Ancestry.com investigating family heritage and connecting to relatives. She also loved researching on her brother Bill's and husband Richard's war records and was able to have them published on the internet website. Surviving are her children, William and Ronda of Sioux City, Michael and Perli of West Richland, Wash., Mary Danette "Nettie" and Dennis Semple of Sioux City, Kathleen and D.A. Baustian of Weslaco, Texas, James and Shelly of Dakota Dunes, and Theresa Anderson of Omaha; 23 grandchildren; 47 great-grandchildren; two great-great-grandchildren; a brother, Joseph Sheehan of Glen Ellen, Ill.; along with numerous nieces and nephews. Mary Jane was preceded in death by her parents; husband, Richard; son, David; grandson, Mark Anderson; great-grandson, Caleb Semple; and two brothers, Archbishop Daniel E. Sheehan and Bill Sheehan. The family would like to thank the nursing staff at Mercy One Medical Center ICU for the great care Mary Jane received.

The family of Mary Jane Anderson created this Life Tributes page to make it easy to share your memories.

Send flowers to the Anderson family.