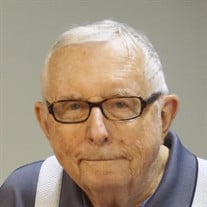 Marvin A. Mozer, 87, of Sioux City passed away Thursday, January 3, 2019, at a local care facility. Funeral services will be at 10:30 a.m. Monday, January 7, at Redeemer Lutheran Church with Pastor Russell Senstad and Pastor David Zirpel officiating. Interment will follow at Memorial Park Cemetery with military graveside services offered by the United States Army. Visitation will be from 2 to 5 p.m. on Sunday, January 6, at Morningside Chapel, Christy Smith Funeral Home. Marvin was born October 1, 1931, in Battle Creek, Nebraska, to Albert and Anna (Thomsen) Mozer. Marvin attended elementary school at Battle Creek Lutheran. His family moved to Norfolk, and he completed his education. After graduation he attended Norfolk Junior college, then transferred to Wayne State College earning his Bachelor's Degree in education. Marvin furthered his education earning his Masters from the University of South Dakota. Marvin proudly served in the United States Army at Fort Riley, Kansas, for two years obtaining the rank of sergeant. He served in the Army Reserves for 5 more years. He was united in marriage to Geraldine Schulz on December 5, 1954, in Tilden, Nebraska. They made their home in Norfolk. Through Marvin's career advancements they lived in Wayne and Allen, Nebraska, Jefferson, Iowa, and Sioux City. Marvin taught at Central High School from 1963-72. When Central closed, he taught at North High School until he retired in 1993. He was a business education instructor, and taught one of the first computer classes at North during his tenure. Marvin and Jerri enjoyed spending winters in Weslaco, Texas, going to dances, and attending the activities of their grandchildren. Marvin was a member of Redeemer Lutheran Church for over 50 years. He also enjoyed singing and playing the harmonica. His favorite song was Long Black Train which he performed many times at various venues in the area. Marvin was a lifetime Chicago Cubs and Nebraska Cornhuskers fan. He devoted his life to caring for Jerri and his family. Those left to cherish his memory include children, Dennis (Lori) Mozer, Brad (Sharla) Mozer all of Sioux City, and Pam (John) Burbach of Moville; seven grandchildren, Nicole (David) De Jong, Jarod (Shantel) Mozer, Josh (Emily) Mozer, Brianna (Jordan) Wineland, Brittney Mozer, Benjamin Burbach and Henry Burbach; five great-grandchildren and another due in March, along with many other relatives and friends. He was preceded in death by his parents and his wife, Jerri, on December 1, 2015. Memorials in Marvin's name can be given to Redeemer Lutheran Church, Sioux City, Iowa.

The family of Marvin A. Mozer created this Life Tributes page to make it easy to share your memories.

Marvin A. Mozer, 87, of Sioux City passed away Thursday, January...

Send flowers to the Mozer family.