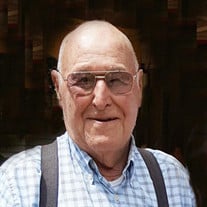 Marvin L. Manker, 89, of Sioux City, Iowa passed away Friday, October 23, 2020 at a Sioux City hospital. Services will be 10:30 a.m., Monday, Nov. 2 at Christy-Smith Funeral Homes, Morningside Capel, 1801 Morningside Avenue, Sioux City, Iowa 51106. The Rev. Jay Denne of St. Luke Evangelical Lutheran Church will officiate. Burial will be in Memorial Park Cemetery. Visitation will be at the funeral home from 3:00-6:00 p.m., Sunday, Nov. 1, with the family present and a prayer service at 6:00 p.m. Due to the ongoing pandemic, the family requests attendees wear a mask and observe social distancing. Marvin was born on May 26, 1931, in Anthon, Iowa. The son of Lawrence and Clara (Bahmer) Manker. He served in The US Army and was stationed in Japan during The Korean War. On Nov. 25, 1960 he was united in marriage to Jeanette Leffler. To this union four daughters were born, Deb (Ron) Speckmann, Sheryl (Clint) Herbert, Sandy (Gary) Reuter, and Cynthia (Don) Wiederin. They made their home in Sioux City, Iowa, where he lived in the same house until his death. Marvin worked as a Superintendent with Boswell and Irving F. Jensen Contractors. In Marvin’s spare time he enjoyed going for motorcycle rides, especially with his sons-in-law and his brother-in-law, Rich Wilen. He also enjoyed fishing with his grandkids. He liked tinkering with things and spending time with his furbabies, Abigail and Molly. He is survived by his daughters, Deb, Sheryl, Sandy, and Cynthia; 13 grandchildren; 14 great-grandchildren; two sisters, Audrey and Elaine; brother, Roger; and many nieces and nephews. Marvin was proceeded in death by his wife, Jeanette; his parents; brother, Lyle; and his grandsons, Nathaniel Speckmann and Brad Reuter. Pallbearers will be his grandsons, Jacob Manker-Wiederin, Zachary Manker-Winn, Blake, Austin, and Colin Speckmann, Bryan, Cory, and Josh Reuter.

The family of Marvin Lawrence Manker created this Life Tributes page to make it easy to share your memories.

Send flowers to the Manker family.