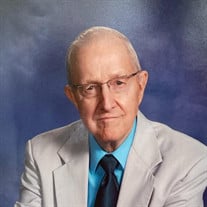 Marvin Dean Jensen passed away peacefully at the age of 91.  He was surrounded by his daughters and amazing nurses at the Raymond G. Murphy VA Medical Center in Albuquerque. A funeral service will be held at 11:00 am Thursday, July 8th, at Central Baptist Church (Located at 4001Indian Hills Drive in Sioux City) with Pastor Grant Lloyd officiating. Burial will follow at Memorial Park Cemetery in Sioux City. Visitation will be on Wednesday, July 7th from 6:00 pm – 8:00 pm with a prayer service at 7:00 pm at Christy-Smith Funeral Homes Morningside Chapel (Located at 1801 Morningside Ave in Sioux City). Please visit www.christysmith.com to share a memory or leave condolences for the family. Marvin was born September 15,1929 in Newcastle, NE.  His parents were Alfred and Charloette Jensen.  He grew up in a loving Christian home.  His family moved to Obert, NE when he was six years old and he enjoyed his boyhood years growing up in a small town.  He worked for the Nebraska Highway Department until he was drafted into the Army in 1951.  He married the love of his life, Gladys Stokes before he started basic training.  He was sent to Germany where he served two years at the Army base in Stuttgart and spent his extra time traveling throughout Europe.   Upon returning home, he and Gladys began a family which included Daniel, Cindy, Deborah, and Dennis.   Of his many careers, he most enjoyed his time at Sears and Roebuck where he started in the delivery department and ended his career as a warehouse manager.   Marvin enjoyed the simple things in life, working in his garden, mowing his lawn and tending to his yard and seeing his children and grandchildren thrive.  He felt he was luckiest man on earth and was loved by his wife of 59 years, his four amazing children and talented grandchildren.  He thought the world of his nephews and nieces. After retirement, he traveled back to Europe with his wife to show her all of sights that she missed when he was stationed there in the service.  After the death of his wife, Marv spent winters with his daughters in Albuquerque where he enjoyed spending time in the beautiful mountains of the Southwest. Left to cherish his memory are his children: Cindy Pacheco of Albuquerque, NM, Deb Jensen Murphy (Michael) also of Albuquerque, NM, Dennis (Sheila) Jensen of Dakota Dunes, daughter-in-law Donna Jensen of Sioux City; his grandchildren: Stacey (Adam), Angela, Colton, Alyson, Connor, Meleshia (Mike), Luke (Carin), Karissa, and Trent; and six great-grandchildren: Skylar, Austin, Kennadi, Natalee, Braxton, and Lily. He is also survived by his sisters- and brothers-in-laws: Ruth (Dean) Snyder, Doris Stokes, Walt (Connie) Stokes, and Mary Stokes. Marv is proceeded in death by his parents, wife Gladys, his son Dan, son-in-law John Pacheco, brothers: Willy Hansen, Verlin (Mildred) Jensen, Vernon (Pauline) Jensen, Sherman “Shine” (Dorothy) Jensen, and sisters: Evelyn (Jewell) “Dude” Cupp, and Donna (John) Young.  Sisters- and brothers in-law proceeding him in death: Eleanor (Delmar) Nielsen, Martha (Gary) Switzer, Harvey (Kelly) Stokes, and Don Stokes.

Marvin Dean Jensen passed away peacefully at the age of 91.  He was surrounded by his daughters and amazing nurses at the Raymond G. Murphy VA Medical Center in Albuquerque. A funeral service will be held at 11:00 am Thursday,... View Obituary & Service Information

The family of Marvin Dean Jensen created this Life Tributes page to make it easy to share your memories.

Marvin Dean Jensen passed away peacefully at the age of 91....