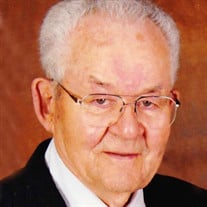 Marvin D. “Marv” Edmunds, 91, died Wednesday, October 6, 2021, at Sunrise Retirement Community in Sioux City, IA. A visitation will be 4:00 pm to 7:00 pm Friday, October 15, 2021, at Faith United Presbyterian Church. A funeral service will be 10:00 am Saturday, October 16, 2021, at Faith United Presbyterian Church, with burial to follow in Memorial Park Cemetery. Online condolences may be expressed to the family at www.christysmith.com. Marv was born in Stratton, Colorado on April 7, 1930, to Everette and Goldie (Tryon) Edmunds. He graduated from Stratton High School in 1948. From then until 1951 he worked as a telegraph operator for the Rio Grande Railroad. In February of 1951, he entered the U.S. Air Force, serving until 1955. He then entered the University of Denver from which he graduated in 1957 with a B.S. in Business Administration. Following graduation, he was employed by the Illinois Central Railroad in Omaha, Nebraska. In November of 1957 he met his wife-to-be, Lorraine, on a blind date. Marv and Lorraine were married in the Presbyterian Church in her hometown of Wahoo, Nebraska on March 7, 1959, and lived in Omaha, joined by sons, Steve and Scott, until 1964 when the railroad transferred Marv to Scottsbluff, Nebraska. The family also lived in Arvada, Colorado and Spokane, Washington before moving to Sioux City in 1974, where Marv was the Illinois Central's sales manager. From 1976 until his retirement in 1992, Marv was employed by Job Service of Iowa in employment services and as detasseling coordinator. Marv was a member of Faith United (formerly Morningside) Presbyterian Church since 1974. He was an Elder, Deacon, member of the Clipper club and Men's club, and was Presbyterian of the Year in 1991. He was active in Boy Scouts and Cub Scouts for over 40 years beginning in 1968. He held a number of positions from Pack Treasurer to District Deputy commissioner and received the God and Service award and District Award of Merit. He was awarded the Silver Beaver Award which is the highest award given to volunteer leaders by the Boy Scouts of America. He was very proud to have two sons and one grandson become Eagle Scouts. Marv was an AARP 55 Alive Driving Safety Instructor and Assistant State Coordinator. He was a member of the Masonic Lodge and the American Legion. He drove children to the Shrine hospital in Minneapolis and veterans to the VA hospital in Sioux Falls for many years. Marv is survived by his wife, Lorraine; sons, Steve Edmunds and Scott (Elaine) Edmunds; grandchildren, Joseph, Paige, and Elizabeth Edmunds; sister, Joyce Edmunds; brother-in-law, Gary Ruzek; uncle, Ralph (Carolyn) Tryon; and several nieces and nephews. He was preceded in death by his parents, two sisters, and three brothers. Memorials may be directed to Boy Scout Troop 208 or Faith United Presbyterian Church.

The family of Marvin Duane Edmunds created this Life Tributes page to make it easy to share your memories.

Send flowers to the Edmunds family.