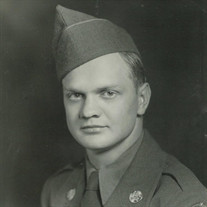 Marlen Mildenstein, 90, of Sioux City, peacefully passed into glory on June 10, 2021 at 4:15 a.m. AMEN A visitation will be 10:00 a.m. to 11:00 a.m., Saturday, June 12, 2021, at Christy-Smith Funeral Homes, Morningside Chapel, 1801 Morningside Ave. A graveside service will be 11:00 a.m., Monday, June 14, 2021, at Cushing Cemetery in Cushing, IA. Online condolences can be expressed to the family at www.christysmith.com. Marlen Nick Carl Mildenstein "Mert" was born September 24, 1930 on the Mildenstein Homestead south of Battle Creek, Iowa. The fourth child of Nick and Anna (Schutt) Mildenstein, first generation German immigrants, he was the baby of the family with two older sisters, Freda and Lorraine, and his brother. Alvin. He joined the Army in April of 1951 served two years in Korea and mustered out in March of 1953. He earned his GED and tried his hand at farming and carpentry before going to work at IPS/Midwest Energy. He worked there for twenty-seven years before retiring in 1992. Mert married Beverly Dorene Anfinson on May 22, 1955 in the Cushing United Methodist Church. They were married for 66 years and had five children, Ricky Joe, Sheryl Ann, Marcia Marie, Cory Allen, and Barry James. They resided in Sioux City for 59 years. His family were members of Grace United Methodist Church. Mert was a Sunday school teacher, a Methodist youth leader, and an usher. He loved to ride his Harley Davidson when he could sneak away from the kids. He loved relaxing with his family, watching TV, sledding, swimming, and camping. The family had a large vegetable garden every summer. He is survived by his wife Beverly; three of his children, Ricky and wife Cecelia, Sheryl, Marcia and husband Will; 11 grandchildren, and 14 great-grandchildren. He was preceded into glory by his children, Cory and Barry.

The family of Marlen Mildenstein created this Life Tributes page to make it easy to share your memories.

Send flowers to the Mildenstein family.