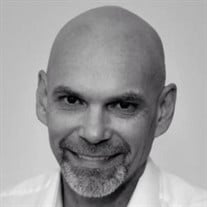 Mark W. Illian, 58, died Thursday, July 8, 2021, after a 17-month health battle at MercyOne Medical Center in Sioux City, IA. A visitation will be held from 1:00 to 5:00 pm on Monday, July, 12, 2021, at Christy-Smith Funeral Homes, Larkin Chapel, 2320 Outer Drive North. Online condolences may be expressed to the family at www.christysmith.com Mark Wayne Illian, the son of Richard and Maralee (Lyon) Illian was born October 2, 1962, in Eugene, OR. He graduated from high school in Anchorage, AK in 1980. On Valentine’s Day of 1991, Mark met Debora Sams and on November 26, 1993, they were united in marriage in Hawaii. Mark was employed for various firms around the country, always making a move to improve his career. The couple lived in Reno, NV, Seattle, WA, and Portland, OR before moving to Sioux City in 2012. Mark’s final, and most rewarding career, was with Synaptic A.P., where he eventually advanced to Principal Architect. Mark was a member of the Abu Bekr Shrine. His family was very important to him, especially his three Labradors. Mark is survived by his wife, Debora of Sioux City; daughter, Danielle Illian of Seattle; his parents, Richard and Maralee Illian and his brother, Matthew Illian, all of Alaska; his dogs, Dutch, Porter, and Cooper of Sioux City; and many other relatives, friends, and coworkers. The family has requested that memorials be directed to the Sioux City Humane Society.

The family of Mark Wayne Illian created this Life Tributes page to make it easy to share your memories.

Send flowers to the Illian family.